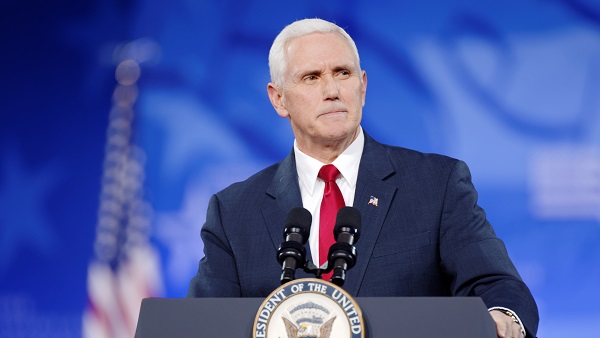 U.S. equities took a bit of a hit at the end of last week. And while it’s always a fool’s errand to presume to know what brought on a reversal in the world’s deepest markets, it’s worth considering the possibility that investors did not like one bit the content of Vice President Mike Pence’s speech on China.

Pence delivered it last Thursday at the Hudson Institute, and it’s a reminder of just how malleable are the members of the political class. Though Pence had long billed himself a supporter of free markets and freedom, the possibility of being vice president was apparently too enticing for the former congressman and Indiana governor. In a bid to placate then presidential candidate Trump, Pence rather quickly revealed a sycophantic side as he became a protectionist overnight. Pence’s lurch toward economic illiteracy was particularly bothersome precisely because he deep down knows better.

That’s of course what made last week’s speech so nauseating in the political sense, and perhaps unsettling to investors in the economic growth sense. To be clear, Pence was talking up the policies of decline as evidenced by his confident assertion that higher tariffs on Chinese goods are on the way. Shame on Pence for promoting what would be harmful to every American worker and company.

Indeed, purposely ignored by the vice president is that limits on Chinese exports to the United States plainly amount to limits on the ability of U.S. producers to sell their goods and services in China. This matters simply because U.S. equities are logically priced to reflect growing sales by American companies in a country that hasn’t yet scratched the surface of its economic potential.

Seemingly forgotten by American protectionists is that the Chinese are still very poor relative to the American people. That they are speaks to why attempts by the Trump administration to slow down exchange between the individuals (sorry Pence, Trump et al, countries don’t trade) in China and the U.S. are perhaps spooking investors. As of right now Apple sells one 1/5th of its iPhones in China, Boeing a quarter of its airplanes, and in the first quarter of 2018, GM sold more cars in China than it did in North America.

Crucial about all of the above is that China already represents a huge market for U.S. producers. Imagine then, what kind of market China will be once its people are rich. Investors constantly looking into the future have already contemplated the latter, and that’s why they don’t like the idea of politicians inserting themselves into what is a very enriching situation in China for U.S. companies. To be clear about trade, it’s always enriching.

That it relentlessly elevates its participants helps explain why investors are routinely spooked by authoritarian lurches toward protectionism. It’s not just that trade barriers shrink foreign markets for the businesses in countries that mindlessly impose tariffs on foreign goods, nor is it that those tariffs shrink the paychecks of the workers they’re falsely billed to protect. What makes tariffs most suffocating is that they slow the individual path toward specialization. Stating the obvious, when we can divide up work with as many “hands” as possible, the odds of our doing the work most commensurate with our unique talents soar. When we can specialize we can be much more productive, which further explains why tariffs scare investors so much: they sap our productivity.

None of this seemingly matters to a man who plainly values being vice president more than he does something as quaint as principle. Having sold his ideology down the river in return for a better bio, Pence accused “China” of (in the words of the Wall Street Journal’s Gerald Seib) “abusing its economic power, stealing American technology, bullying the very American companies that have helped its rise….” Oh dear.

On the subject of “economic power,” “China” has nothing of the sort. Businessesestablish economic power, not countries, which raises the question why Pence would assume “China” could assert power of the economic kind in the U.S. Really? How? Does central planning work when the Chinese practice it? Back to reality, economic power is achieved most often in ephemeral fashion through painstaking work in the private sector. Starbucks doesn’t have 3,400 stores in China thanks to the actions of people like Pence as much as the global coffee chain built a remarkable brand that China’s U.S.-fascinated citizens can’t get enough of. The same goes for McDonald’s: China is now its 2nd largest market. That Nike’s #2 market is China speaks yet again to how much the Chinese people love all things American. Crucial here is that “America” didn’t create market share for U.S. companies, but the capitalist profit motive did. Applied to China, that its businesses increasingly have “economic power” in the United States is the surest sign that “China” the state doesn’t much factor in the doings of the businesses that populate it.

Taking all of this further, Nike manufactures more shoes and apparel in China than it does any other country. Apple manufactures a great deal there too. This rates prominent mention in consideration of Pence’s belief that China as a country regularly bullies U.S. corporations while stealing their technology. Funny about all this is that the most dynamic and valuable companies in the world aren’t troubled by what troubles the vice president. This matters given the implicit message of Pence’s speech: in decrying what he deems too much economic power, too much bullying and too much stealing, Pence is saying that politicians should manage exchange between American and Chinese producers, not the producers. Such a view is scary when we remember how poorly state power performed in the 20th century, plus it’s insulting to intensely brilliant U.S. corporations for a politician like Pence to think technology stolen from them could ever be effectively utilized in the marketplace by thieves. Wanting to flex his already uncoordinated “America First” muscles, Pence succeeded only insofar as he showed how obtuse politicians can sometimes be. And paranoid.

Indeed, arguably the most embarrassing aspect of Pence’s presentation was his mimic of the left’s wildly overdone paranoia about Russian interference in the 2016 presidential election. In the vice president’s case, he laughably claimed that his boss’s toughness at the negotiating table has “China” working to interfere in the 2018 mid-terms and beyond. Apparently China’s leaders want Trump out. About this, one can only hope that the Chinese people don’t think Americans as conspiratorial and paranoid as some of their leaders.

In a speech meant to showcase the Trump administration’s “tough” bona fides, Pence only succeeded insofar as he reminded listeners that the 45th president isn’t nearly as free market-oriented as his supporters wish him to be. Investors were seemingly listening. Arguably worse for Pence is that people who remember the old Pence were listening too.