Socialism Is The Gospel Of Abundance? 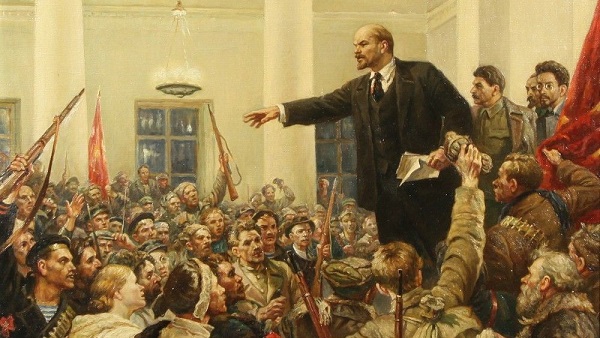 1917 Russia Revolution – Vladimir Lenin, the leader of the Bolshevik Party, addresses a crowd of revolting soldiers, sailors, and workers in Petrograd.

Reading responses to an article on the Christianity Today web site I came across a lady who asked, “Why not free universal healthcare?” Her question reminded me of children who ask simple questions such as “Why is the sun hot?” If you give them the physics of how the sun works, they don’t understand it. So I tell them God made it hot to keep us warm. Of course, then they ask, “Why?”

I gave the woman a brief response from economics and she responded that her Canadian friends were happy with their system so there was no reason for the US not to have something similar. Of course, if we limit our knowledge to just what the woman’s friends in Canada say about their system then without a doubt we should rush to the ballot box and vote for the most socialist Democrat candidates we can find. The problem with her logic is that she assumes her personal experience and those of her Canadian friends are all she needs to solve the problem of healthcare.

When I taught economics, I frequently ran into the same attitude in students. Their personal experience didn’t match the textbook economics world so the textbook must be wrong. Hayek called that kind of thinking pseudo-reason or rationalism in his last book, The Fatal Conceit. Pseudo-reasoning says that for something to be true, the individual must be able to understand it completely and foresee all of the consequences. In other words, personal experience trumps all other knowledge.

Most people in the West labor to remain ignorant of economics. Jim Wallis, founder of Sojourners, urges his sycophants to abandon the “gospel of scarcity” (economics) and embrace the “gospel of abundance” (socialism). According to Wallis, God created the world with enough wealth so that all would be rich if wealth was evenly distributed. Of course, Wallis is ignorant of economic history in which the world suffered frequent mass starvations from the beginning of history until the advent of capitalism.

But why not have universal free healthcare? The simple answer is that the wealth of the world is limited. Socialists have no problem understanding that the world’s physical resources, such as oil and copper, are limited. They continually scream that we’re using them up so that future generations won’t have any. We create wealth when we extract those resources from the earth and convert them into something people can use, Those goods are wealth, not money. We can print all of the money we want, but it won’t create any more resources. The US has a limited amount of wealth regardless of what Wallis thinks and that applies to healthcare.

A world of limited wealth forces us to make tradeoffs. Economists call them opportunity costs: what am I giving up to get more of something else? If we want universal free healthcare we have to give up something. The most basic tradeoff in economics is between investment and consumption. Healthcare is consumption. So to increase it, we would have to give up investment in businesses that create jobs since we would have to tax wealthy people more. At its simplest, universal free healthcare would cost us many new jobs and increase unemployment.

The woman on the Christianity Today sight would simply respond to my economic logic by saying that people in Canada and Europe have jobs and universal healthcare. Her problem would be in looking only at the short run. In the short term, people see only money going to poorer people to provide healthcare. They would not see the reduction of investment and creation of new jobs. Those take time to become visible. After ten years of failing to invest in businesses and create new jobs while the working population grows, people would begin to notice the rise in unemployment, but they wouldn’t be able to attribute it to free healthcare because of the lag in time. We would have walled out a whole generation from any hope of getting a job, as has happened in many European countries.

Americans would not be so enamored of Canadian and European “free” healthcare if they knew more about it. Economics teaches that we have to ration the use of scarce resources. In a free market, prices do the rationing for us. European and Canadian healthcare systems ration healthcare with long waiting periods and by refusing to provide many procedures Americans take for granted. That’s why thousands of Canadians and Europeans visit the US every year to pay for procedures they can’t get at home.

Why, then, are Canadians and Europeans happy with their “free” healthcare? The answer lies in envy. As Helmut Schoeck points out in his Envy: A Theory of Social Behavior, people envy most those closest to them in status. They rarely envy the elite who are so far above them that they have no hope of joining the elite. But a neighbor enjoying something that envious people don’t have terrifies them and spawns resentment.

Envious people are never happy, but they’re more content in a society with a small controlling elite and everyone else as poor as they are. That’s why you’ll find poor Cubans praising their “free” healthcare even though they suffer from a lack of medicine and diagnostic equipment such as MRIs. Canadians will praise theirs while travelling to the US to get better care or to avoid long waiting periods for care. Envious people will be most miserable in a free, prosperous society in which some people common folk are better off than others.

Why not free universal healthcare is a simple question. The answer is complicated and requires some understanding of economics. The basic answer it that it will create unemployment and lower living standards in the future by reducing investment.

But it doesn’t matter because the motivation behind the question is envy, not concern for the poor. Envy is kryptonite to reason.