Abolition Of Electoral College Is Attempt To Suppress Dissent 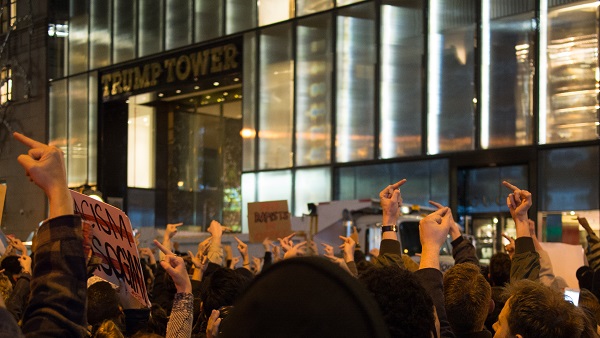 Protest at Trump Tower in November, 2016.

There should be greater attention paid to the comments made by Washington’s growing number of hard-left politicians.

Socialism is increasingly seen as part of the American political environment. It is more than just an an economic philosophy. Because it involves the centralization of a key part of a nation’s life, the use of government power to enforce its tenets is a major necessity in achieving its strategies and goals.

In many ways, this runs directly contrary to the standard Constitutional  emphasis on individual rights. But that is not seen as an obstacle for those who view that bedrock document as open to loose interpretation.

The use of overbearing power to insure the compliance of those who would stand in the way of the activities of leftist governments rather quickly develops into an habitual practice. The old USSR, or today’s Venezuela, are two of the best known examples, and they are the rule, not the exception.

The 2018 midterm elections brought with it a new generation of pro-socIalist elected officials. They have not even officially taken office, and their philosophical proclivity to suppress dissent has already taken hold.

It is difficult to take many of Representative-elect Ocasio–Cortez‘s comments on substantive issues seriously due to her rather shaky grasp of facts. But she is abundantly clear about her devotion to socialist policies, and her determination to execute a “fundamental transformation” (to borrow Obama’s phrase) of America.

True to form for socialists across the globe, Ms. Ocasio–Cortez has little tolerance for oppostion.  Following an instagram post by Donald Trump Jr. criticizing her by pointing out the deficiencies of her political philosophy, she responded, not with a countervaling argument or even an ad hominem attack, but with a comment on the House’s ability to issue subponeas. The message was clear, and consistent with the history of socialism: dissent will be punished.

More than just an attack on individual opponents, the U.S. left is now focusing on essential components of the U.S. government that block  their goals.

Preventing the implementation of their radical concepts is the steadfastness of the U.S. governing structure. As a consequence, it has become a target.

The practice of basing legal decisions on law and precedent limits the ability of biased judges to push a socialist agenda.  As a result, the radical 9th Circuit has had its results frequently overturned by the U.S. Supreme Court. That explains the extrordinary vehemence of the left’s opposition to G.O.P. president- nominated justices.

A more recent battleground has been added to the  “fundamental transformation” fight. Based on equal representation of each state, the U.S. Senate is a powerful check on the ability of left-wing  dominated jurisdictions to push their agenda on the rest of the nation.  That has led to rumblings about abolishing it. The latest assault comes from former Rep. John Dingle, (D-Michigan) who openly proposed just that in an Atlantic theatlantic.com article:

“Abolish the Senate.  At a minimum, combine the two chambers into one…It will take a national movement, starting at the grassroots level, and will require massive organizing, strategic voting, and strong leadership over the course of a generation.  But it has a nice ring to it, doesn’t it? ‘Abolish the Senate.’”

The attempts to reject the traditional impartiality of judges and  to abolish the Senate reveal a dramatic, even if obvious fact: socialism is wholly incompatible with the American form of government, and also with basic American culture and traditions. Socialists recognize that reality, but it does not appear that others do.

Indeed, even some of those who rather blithely claim to support socialism are unaware of its true nature, believing it to be just an enhanced form of liberalism.  That’s its greatest strength: the ability to hide its true nature from the masses.

Fank Vernuccio serves as editor-in-chief of the New York Analysis of Policy and Government.