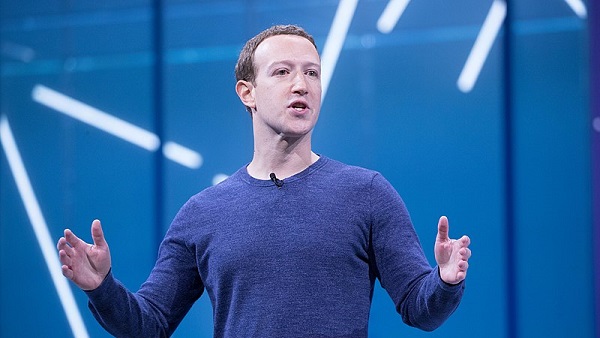 Facebook is in the midst of another major sell-off after The New York Times reported that Facebook allegedly made private, personal messages of its users available to companies such as Microsoft and Netflix. According to the report, this practice started in 2010 and in some cases continued into 2018.

The story broke early Wednesday morning, and Facebook’s stock is down over 7% since trading opened on Wednesday. 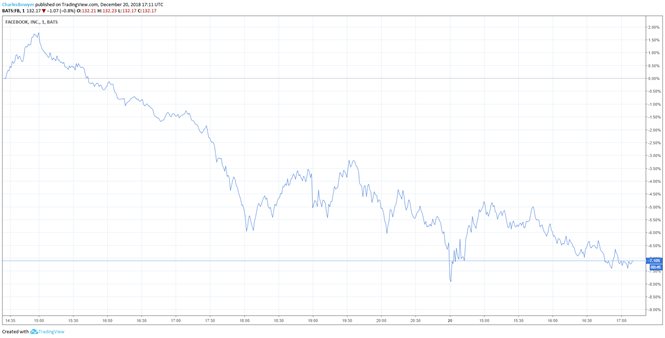 It’s become clear, with Facebook experiencing scandal after scandal, that these are not just the consequence of extra scrutiny on Facebook. There is something unique about the company that leads it to repeatedly cross the line of responsibly handling user data. After all, Facebook’s mantra used to be “move fast and break things.” Then they changed it, once they had enough power to actually break things.

So we shouldn’t say we’re shocked by this latest scandal. There were warning signs way ahead of time, indicating what kind of company Facebook is. These were the reasons the portfolios I help produce held (and holds) Facebook at a zero weighting. Mainly I focused on forensic accounting problems. This data, from July of 2017, shows the forensic accounting issues that demonstrate why Facebook was a dubious investment for us. 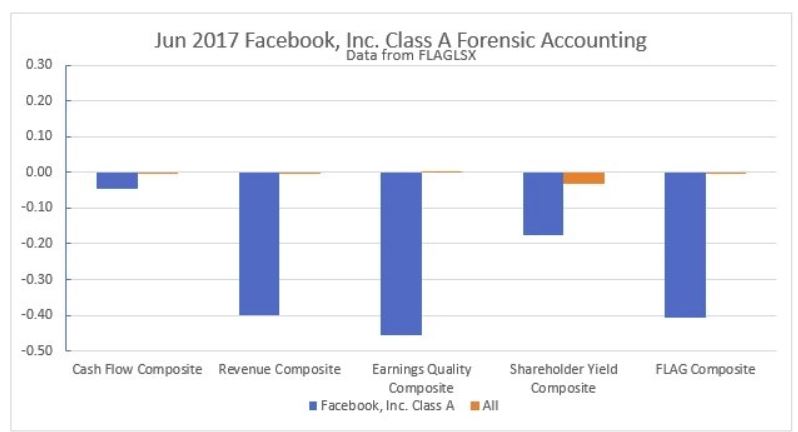 *Blue is Facebook’s score, orange is the average score for all companies in our universe. Chart courtesy of TradingView.com

There were signs that the company may have been incented to gild the lily in its financial reporting. Whether they’ve truly gilded it or not, it’s hard to keep the lily growing and blooming fast enough to keep up with expectations. The problem is that FB lives and dies on growth expectations.

That’s why the financial statement analysis showed some flags in sales and revenue growth – they’re too high. But high growth is good, right? Yes, real high growth is a blessing, but it comes with problems — for example, the encore problem. You get known as a growth company and woe-betide-you if you have a quarter without growth. Growth companies ride the tiger of expectations. This creates very strong incentives to tweak things here and there to keep the appearance of momentum going.

As we’ve said, too much growth creates forensic accounting temptations. But what if management resists the temptation to distort the financial reports about operations, and instead opts to actually goose the operations of the company in order to keep growing at that accelerated pace? Well, that creates another problem – quality control. It’s very hard to grow fast for a long time and not start messing up. This culture of ‘move fast and break things’ means that one of the things that gets broken is customer trust. Data mismanagement and breaches are endemic to hyper-growth companies with encore problems. Remember Equifax? It had the same problem, which I wrote about in detail here.

Facebook has had these problems for a while. They’ve had many privacy violations, broken promises, and apologies before, but it’s just at frenzy level now due to their repeated transgressions. In fairness, some of this scrutiny is driven by the Russian hacking story. The data breaches which involved Cambridge Analytica fit that narrative beautifully and laid the groundwork for Facebook to go from collateral damage to a co-belligerent in the rhetorical war on Russian hackers.

A company in a hurry to grow doesn’t just have unintentional mess-ups, it also ends up intentionally messing up, which is to say that it will tend to muddy the ethical waters. Let’s face the fact that a big part of Facebook’s problem is its business model. As Tim Cook, CEO of Apple, pointed out: Facebook’s users are not really its customers; they’re its product.

Now, of course, that’s true of almost any media company, or at least any media company that lives by advertising. When you watch television, you are not the customer, you are the product. The advertisers are the true customers, and the media company is selling soap sellers access to your eyeballs. Okay, we’re all used to that already. Social media platforms like Facebook are different. Unlike TV, whenever you’re watching social media, social media is watching you. And it sells what it sees to its real clients, its advertisers, which includes everything from search engines and streaming sties to political campaigns. But people don’t like to be treated like products. There was bound to be some kind of collision, and it’s no shock that a company that operates on the idea that breaking things is good would keep on colliding.