Why Christmas Won Over Greek Philosophy 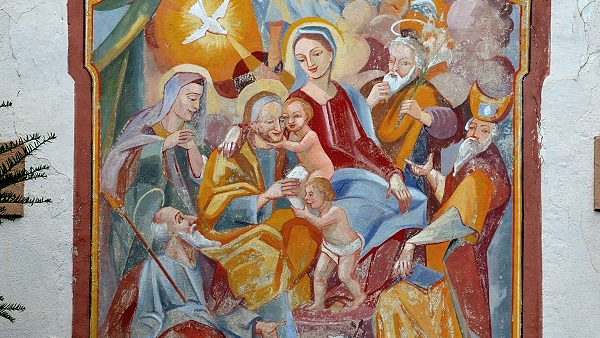 Painting of a Nativity Scene in Fladnitz, Austria.

Logos (translated as “Word”) is a Greek idea first articulated by Heraclitus (535 – 475 BC). It postulated that our world make sense because alongside our marvelous physical universe exists a parallel realm of reason and thought. Plato (428 – 348 BC ?) thought of Logos as the realm of truth, a parallel universe of Forms (including ideas, language and logic). That realm of Logos, Plato assumed, pre-existed our material world. The visible cosmos may be like a shadow, copy, or image of that true, though unseen, world. That realm being non-material or spiritual, does not perish. Therefore, it is eternal.

The Buddha (480-400 BC ?), one of my ancestors and perhaps a senior contemporary of Plato, had an opposite paradigm. He was a great thinker, therefore he knew that thinking or reason could not lead us to Truth.

The Buddha speculated that in the beginning was Silence — no thought, no imagination, no sound, just Nothingness. Out of that absolute Nothingness came everything — without a cause, without a purpose.

Less than a hundred years ago, there were atheists who had an alternative philosophy. They thought that perhaps there was no beginning. The universe that we see may have existed for ever. An accident turned dead matter into life . . . which began to evolve . . . the Struggle for Existence generated so many accidents that blind chance evolved animal sounds . . . more accidents then evolved those sounds into speech, logic, and ideas. Ideas, these atheists thought, are shadows of reality that we experience — it was the opposite of Plato’s philosophy that our everyday reality is a shadow of eternal Ideas.

These atheists assumed that In the beginning was no life, no thought, no word. Therefore, our world and life have no meaning. Language, logic, love, and beauty have nothing to do with Truth. All truth is myth. “Truth” is stories that adults tell children and each other to manipulate individuals and control society by making-up meaning and purpose to life and world that have no intrinsic meaning.

If you throw a stone up to hit the sun. It starts out fast and begins to slow down immediately. Soon it stops going up and starts to come down. If it kept going up . . . and if its speed kept accelerating . . . then you will have to assume that the stone was being propelled by some energy different than what you exerted. There must be an unknown parallel energy, greater than the earth’s gravitational pull. What is this unseen, unknown, energy that is propelling the expansion of the material universe?

Discoveries such as these have forced the scientific community to postulate a parallel universe of Dark Matter and Dark Energy. It co-exists with our universe and impacts it. The current thought is that the observable universe is less than five percent of the real “universe” or the “multiverse.” At least ninety-five percent of the reality is unknown to us . . . we are in complete darkness about it, therefore we call it Dark Matter and Dark Energy.

“Observable” “facts” such as the acceleration of the expansion of the universe has forced the scientific community to entertain the possibility that we live in a complex universe, which may be a multiverse — It has to have a realm beyond what is observable and physical.

Prominent Greek philosophers including Socrates, Plato, and Aristotle were driven to a similar conclusion as today’s science. These men were trying to understand our inner world of truth, deception, language, grammar, logic, mathematics, intuition, imagination, dreams, ethics, virtue, justice, goodness, evil, family, education, politics, beauty. In short, the world of the spirit or soul: our desire for meaning, personal significance and immortality. This inner reality of our being is more obvious than the acceleration of the speed of expansion of the universe. Our daily experience of the inner realm of the spirit demands explanation: Why is the universe mathematical? Why should language be logical? Why should (human) animals be ethical?

Contemporary science understands that the visible world cannot be understood without postulating unobservable (and therefore) “Dark” matter and energy. Likewise, Greek philosophers understood that our inner world of the Word (logos/thought) cannot be understood without postulating a parallel realm of the WORD. That hidden world of Logos — a realm of Forms and Ideas had to be there — even though we lacked the tools to observe and understand it. Human inability to observe that hidden world of Logos meant that for the Greeks, the world of Logos, had to remain a world of thoughtful speculation — much like our current theories of the Dark Matter & Energy.

The Greeks were not the first to conclude that the visible realm of the word could make no sense without a parallel world of the Word. The very first words of the Jewish scriptures had declared that indeed, in the beginning God created two realms — the heavens and the earth. “Heavens” meant much more than the observable skies. “Heavens” was the spiritual realm of the Word (logos) — of imagination and creativity, logic and language, laws and authority, good and evil, angels and demons, principalities and powers.

So, Why did Christmas win over Greek rationalism?

There are foolish theologians who think that Christmas won because “stories” of prophecies, angels, virgin birth, dreams, visions, and star-guiding wisemen have greater power than rational philosophy. The reality is that Christmas — Word becoming flesh — won because it gave tangible evidence of the best of Hebrew and Greek worldviews.

Understanding this point is easy.

Now imagine . . . An amateur scientist in Timbuktu succeeds in establishing contact with ET Intelligence on another planet or galaxy or in a parallel dimension. Together, they schedule a global conference making it possible for our scientists to ask questions to this “being” from outer space. In this historic, first-ever interaction with an “angel” the world learns that we call Dark Energy “dark” simply because we cannot experience it. In fact, it is Light and the very source of all light. The Dark Matter is called dark, because we are blind — we know nothing about it. In reality, what we call Dark Matter is Life, the source of all life and intelligence. Intelligence (logos) exists on this earth and beyond the earth because the real life has always existed.

Now imagine . . . this Extra-Terrestrial Intelligent being, goes on to explain that the amateur scientist in Timbuktu did not find him. It was the Light of the World that sent him to connect with a humble truth-seeker to give him the enlightenment humanity was looking for.

Christmas did not win the world because childish stories of angels visiting Zachariah, a virgin Mary, a bunch of shepherds have greater power than the philosophies of Greek Rationalists. It won because the eternal Word entered our world of time. The life-giving Word became flesh — tangible. It turned our intellectual, moral and social darkness into light. Simple shepherds heard the angels sing because they were humble. The religious-skeptics, on the other hand, saw demons scream at the word of King of heaven.

On Christmas day, the Light of the world lit up our realm of intellectual and moral darkness. Dreams and visions from the heavenly realm began to guide lost souls, seeking God’s kingdom and righteousness.

Christmas won because no philosopher or scientist has been able to improve upon the worldview that it encapsulates. No guru has come to lead us into Truth. No king has come to restore the kingship sons of Adam and Eve lost to become slaves in their own domain; no other savior has come to save us from our sin and slavery to Satan.

None but Jesus, born to us (Isaiah 9:6), has shed his blood to offer a realistic peace to our bloody earth.