Our Society Is A Shame Factory 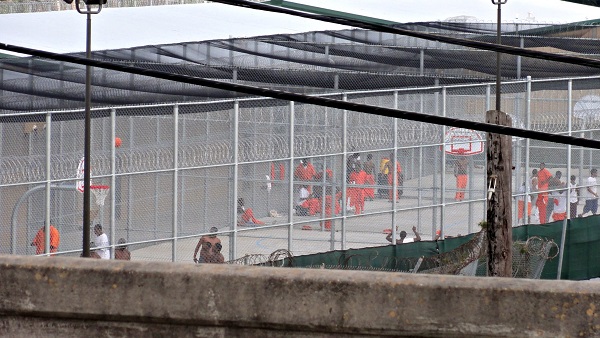 “Since I am an experienced sewer, tonight I am working on a special project making rape resistant shower curtains for the prisons.”

Craig Cesal is serving a life sentence in federal prison for doing body work on trucks that were moving marijuana, a first time offense. Our public servants would not let him out to see his son’s funeral. Rapists and murderers have come and gone during his time in America’s prison camps. He often works 16 hour shifts sewing for the US government. One of their specialties is “rape resistant” shower curtains.

Watch my interview with Craig here:

Craig’s exile inside the belly of our government reveals things that remain hidden to us free folks on the outside. What human creatures make others sew rape-resistant showers for fellow captives to hide behind? Who in their right mind made this kind of legal system? Why do millions of Americans take rape-adjacent showers every night in jail, state, and federal warehouses for nonviolent choices? Why do Americans think the evil of throwing humans into violent cages for victimless acts is okay if a majority of group-thinkers complies?

Our government is built on the threat of rape. Every law against nonviolent choices—from suspended licenses to raw milk regulations to workplace rules and coming speech codes—are enforced by the threat of deprivation of freedom, family separation, and, ultimately, assault and rape. We all know this to some degree but because it is not in our face and because others tolerate it, we remain locked in a societal bystander effect. We are incapable of moving to our neighbors’ defense. Just like Stanley Milgram’s disturbing experiment showed, most humans tend to go along with the rules of dominance and submission games as long as they are told it is okay by an authority and that they will not be held individually responsible.

But the more we see the failure of prohibitions and regulations and taxation to make our world better at the expense of the sacrificed few, the more the shame of our compliance builds. This shame is supposed to be safely contained on the backs of our designated scapegoats: our prisoners and policemen and soldiers sent to unnecessary decades-long wars. But the more our justice rituals fail to bring prosperity, peace, and fairness, the more unsatisfying their cover stories become. The shame is leaking onto all of us. It is seeping into all of our institutions. Social media sites are flooded with daily shame mob battles of rage. Even football has become stained with the shame of concussions, battered wives, and police shootings.

We have no where to hide from shame. The left was quick to try to quarantine their minds from the shame storm of recent stories of refugee children being placed in cages. When popular images of migrant children wrapped in foil in kennel-like enclosures turned out to be the doing of their adored role model Obama, they quickly shielded their minds from the painful realization that they hired this man, most of them two times, to carry out this behavior on their behalf and largely stayed silent.

Nevertheless, many faithful voters persist that the children in cages at the border were solely the shame of Trump voters. Like playing a game of hot potato that can sear a hole through their chests, those who see themselves as morally better than their politically incorrect nemeses feel the need to dump all responsibility for caging and family separation onto their rivals.

But the shame cannot be contained. Leftists know they supported politicians who destroyed Yemeni, Syrian, and Libyan children for no defensible reason. They know they share the blame for knowingly voting for more mass incarceration-related family separation, drone strikes of children, and other ghastly barbarism in recent elections. And just like their Republican rivals before them, when their tribal leaders pitched elective wars for obviously dubious reasons, they submitted. Now they stand up to their knees in shame with no where to drain it.

The Covington Catholic school boys were a promising target for shame shifting. Their smiles in the face of an elderly Native American’s drumming felt like an obvious symbol of unrepentant shame. Finally, millions could relieve their own cauldron of shame for choices like voting for drug war politicians and status quo keepers of political prison camp laborers like Craig Cesal. Then the mob fervor was sabotaged by alternative camera angles that revealed the relative composure the teenagers showed in the face of bee-lining grandstanding adults and slurs from another group.

Of course, President Trump has been a perennial target of people full of shame. But he fails to be an effective outlet because he is so shameless. He refuses to indicate the posture of guilt for anything. A cleansing requires the accused to admit sin so that the accusers can feel comparatively exonerated. Trump simply will not play this role. Meanwhile, he himself places the shame of creeping debt and socialism onto the backs of his rival party while conveniently doing little to allow young people to opt out of failed socialist schemes like Medicare and Social Security before they take their money and burn.

It is popular in culture to be ashamed of race, gender, family togetherness, marriage, children, wealth, competence, able bodies, technology, language, religion, nationality, fitness, and meat. Each of these categories are occasions for difference and differentiation is where people can sometimes engage in shameful behavior. Shame is driving us to erase all differences and boundaries and thus erase all meaning behind these categories of life. But if children could vote, and white men became a tiny impoverished minority of the population, and gender became completely fluid, and wealth was equally printed out to every human in the land, and religion was privatized and pluralized, and meat was completely grown in labs, and body shapes had no preference, would we still bomb a country that threatened our world reserve currency? Would we still place dissidents of new regulations and speech codes in cages with rapists and murderers? Would we wrap our jails with barbed wire fences or cotton candy? Would we reform the prisons we kept by forcing misfits of our new undifferentiated glory into reeducation programs meant to reform their minds for their own good? What if they fled the classroom? Would they be tranquilized or hugged by social justice correctional officers?

Would we still be submerged in shame?

Perhaps the only way to relieve our shame is to realize it need not exist at all. Shame exists because we refuse to trust in the sovereign power of love. Love requires us to unplug from toxic groupthink and reclaim our personhood. When we love ourselves, we can learn to love our neighbors as ourselves. When we care for ourselves, we will not want to initiate physical suffering on others. When we are free of shame, we will have nothing but love left for our neighbors. We will not hide behind collective complacency with violence against misfits. We will be free.