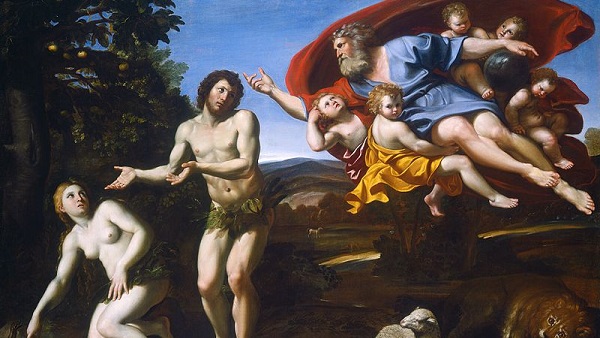 Did Jesus talk about debt? The Bible talks about it: Torah has a considerable amount of material about debt and debt remission. Proverbs has warnings about it, and Paul seems to have at least one comment discouraging it, but by and large debt is not considered an important part of Jesus’ message, perhaps not any part at all.

But Jesus did talk about debt, and what he said about it was not a side message, it was a major theme.  And why should debt not be one of the themes of Jesus, after all, there’s good reason to believe that the theme goes back to the Garden of Eden.

After the woman and the man ate from the Tree of the Knowledge of Good and Evil, God sought them out and inquired about this violation:

Here it is in Hebrew. I’ve highlighted the word usually translated as ‘deceived or ‘beguiled’.

The Holladay Lexicon defines the word when used in different conjugations:

give ones false hope…trick, deceive…

The BDB Lexicon includes a definition, at least in certain conjugations, which focuses on debt/lending:

lend on interest, or usury, be a creditor. nasaÀa postpone, delay; sell on credit…

This is rendered somewhat complex in that Hebrew has a complex set of conjugations, more complex than those in English. We have active voice and passive voice, but Hebrew has seven categories which are interactions of both active and passive voice, as well as intensive and non-intensive. The Hebrew word for what the woman said the serpent did to her typically means to deceive, but a different conjugation implies indebtedness. In addition, the noun form of the word also refers to debt, per BDB:

The words highlighted below are all the same word or based on the same root:

“If you lend money to My people, to the poor among you, you are not to act as a creditor to him; you shall not charge him interest.

“And this is the manner of remission: every creditor shall release what he has loaned to his neighbor; he shall not exact it of his neighbor and his brother, because the LORD’s remission has been proclaimed. (Deut. 15:2 NAS)

“Woe to me, my mother, that you have borne me As a man of strife and a man of contention to all the land! I have neither lent, nor have men lent money to me, Yet everyone curses me.” (Jer. 15:10 NAS)

In what sense did the serpent indebt the woman? I think the answer to that is probably very complex, but the word root clearly has connotations and overtones about debt. Theologians have tended to gloss over those connotations (though not universally) perhaps because theologians are seldom trained in economic and financial matters. Anyone who has read my commentary on economic themes in the Gospels has seen how many glaring instances of financial/economic commentary have been overlooked by theologians.

For more commentary on the theme of indebtedness in Genesis 3, please see my S.T.L. thesis on the Hebrew text of Genesis 1-3.

But the existence of some sort of debt aspect to the fall of man is consistent with later Biblical commentary on redemption, in fact, the idea of redemption itself automatically comports with a debt theme. Long association of words such as redemption with religious sensibilities only, has so conditioned us that we become immune to the obvious financial overtones of the act of redemption.

Likewise for the idea of ‘ransom’. Ransoms are paid, often to buy people out of slavery associated with unpaid debts. There is a temptation to treat such ideas as ‘only metaphors’, but I think such a temptation should be avoided. These categories of thought, indebtedness, redemption, ransom are fundamental characteristics of human nature and of our relationship with God. In some sense, the merely financial uses of these ideas are the metaphors, the extension of an original idea to something else.

This understanding of the meaning of beguiled/indebted in Genesis 3 fits well with the rest of the Torah. For example, the system of calendrical debt forgiveness, property restoration and rest found in the Shemitah and Jubilee laws, are quite consistent with these themes.

Adam and Eve were exiled from their home (the Garden), in which they would eat without having to plan (it was already a mature garden) and (as I have argued above) indebted. The Shemitah/Jubilee system returns people to their homes/property, allows them to eat freely without labor and releases them from debt. It ritualizes the eventual reversal of the effects of the tragic events of Eden. That both places debt as an important issue and retroactively helps to shed light on the original story of the garden.