The Declaration Is Pro-State Sovereignty, But Anti-Slavery 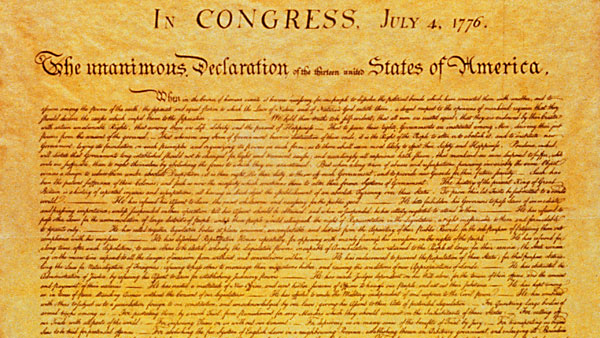 Government that is best which is capable of producing the greatest degree of happiness and safety, and is most effectually secured against dangers of mal-administration; – and that, whenever any Government shall be found inadequate or contrary to these purposes, a majority of the community hath an indubitable, unalienable, and indefeasible right, to reform, alter, or abolish it, in such manner as shall be judged most conductive to the public weal.[1]

Even Alexis de Tocqueville illuminated the people’s right, and the States’ right, to remove themselves (secession), from a federal government which does not meet the standard required and established by the compact in the Constitution:

The Union was formed by the voluntary agreement of the States; and in uniting together they have not forfeited their nationality, nor have they been reduced to the condition of one and the same people.  If one of the States chooses to withdraw from the compact, it would be difficult to disprove its right of doing so, and the Federal Government would have no means of maintaining its claims directly either by force or right.[3]

The framework of separation was laid out by Samuel Rutherford in Lex Rex.  Author Gary Amos describes “arbitrary rule, despotism, and tyranny” as material breaches of the compact – carried forward as “a series of tyrannous acts” leaving the people to publically name the wrongdoings of the king.   These steps for how to separate from the king are taken from Lex Rex; Rutherford lays out the procedure and protocol for abolishing the king’s rule.[4]  This is the very process taken during the Revolution of 1776, and the protocol of the Declaration of Independence.  The Magna Carte of 1215, Locke’s 1689 Second Treatise, and the Vindiciae of 1579, laid out similar theories.[5]

If the states did not retain their sovereignty, excepted by only those powers directly enumerated in the Constitution, then “the states were reduced to little more than counties in a nationalist regime, and the central government emerged as unlimited in power if supported by a majority.”[6]  This would be, as discussed in the Federalist Papers, tyranny of the majority.[7]  And interestingly enough, when the Southern States seceded from the Union on March 11, 1861, they articulated each State’s sovereignty and appealed to God.  The preamble of the Constitution of the Confederate States of America states, “each state acting in its sovereign and independent character” and “invoking the favor and guidance of Almighty God.”[8]  Even nearly one hundred years after the revolutionary generation, Americans understand and believe in their State’s sovereignty and God’s providence over the nation.

This sentiment, and direct link to the 1776 Revolution, was noted in 1861 by Alexander Stephens, vice president of the Confederacy.  The Confederate States of America “simply wish to govern ourselves as we please,” proclaimed Vice President Stephens. “We stand where our revolutionary fathers stood in ’76.  We stand upon the great fundamental principle announced on the 4th of July, 1776, and incorporated in the Declaration of Independence – that great principle announced that government derive their just power from the consent of the governed.”[9]  The institution of slavery, which had also beleaguered the Founding Fathers, was not a just endeavor, but sovereignty of the consent of the governed, State-rights, and self-determination (with the enslavement of specific peoples notwithstanding) originated within each State and upheld in the Declaration of Independence.

Yet, the North also used a similar argument.  New York Senator William Seward argued that a “higher law” than the Constitution made slavery illegitimate.  Seward contended, notes historical scholar Marshall DeRosa, that “because natural law does not presumably sanction slavery, any positive law that does is in effect null and void as a consequence of the natural law prohibition;” further noting, “therefore with violating natural laws that should take precedence over that U.S. Constitution in the event of a conflict between the two.”[10]

Seward states that “by the law of nature and of nations…All these laws must be brought to the standard of the laws of God, and must be tried by that standard, and must stand or fall by it…We cannot, in our judgement, be either true Christians or real freemen, if we impose on another a chain that we defy all human power to fasten on ourselves.”[11]Additionally, Steward ties this argument to the Declaration of Independence, and according to DeRosa, how “the subversion of the U.S. Constitution would result from the violation of the American political axiom that ‘all men are created equal’ with inalienable rights.”  Seward argued that the Declaration, as the founding compact, and that “in the spirit of the declaration” the Constitution cannot be used to violate man’s God-given right to “life, liberty, and the choice of the pursuit of happiness” which by natural law, that is God’s Law – the “higher law” – is prohibited.[12]

During this period of American constitutionalism South Carolina senator John Calhoun articulates true American Federalism when disclosing that the federal framework, notes Professor DeRosa, must “consider the national government as something distinct from, independent of, or superior to the states is a misconception;” and quotes Senator Calhoun in that the federal government “is but a part of a system of government.  It is the representative and organ of the States, only to the extent of the powers delegated to it.  Beyond this, each State has its own separate government…it must be very imperfect, unless viewed at the same time, in connection with the complicated system, of which it forms but a part.”[13]

In this excellent analysis from Calhoun on the compactual rights of the States and self-government, then combined with Seward’s equally brilliant analysis of the Fundamental Right of property (the property of one’s self in this case) called out also in the founding compact, and underpinned by scripture lies the irony. God frequently places His children to reconcile against His word and history of the Hebrews in order to righteously forge forward toward building a shining city upon the hill to radiant His Light and Glory as a living example of His Purpose.  In this thus resides Natural Rights and Natural

[4] Gary T. Amos, 1989, Defending the Declaration:  How the Bible and Christianity Influenced the Writing of the Declaration of Independence, (Brentwood, TN: Wolgermuth & Hyatt, Publishers, Inc.), p. 142, see footnotes 71-77 for the direct references to Lex Rex.

[5] Gary T. Amos, 1989, Defending the Declaration:  How the Bible and Christianity Influenced the Writing of the Declaration of Independence, (Brentwood, TN: Wolgermuth & Hyatt, Publishers, Inc.), p. 148.