Collectivism Leads To Violence? It IS Violence 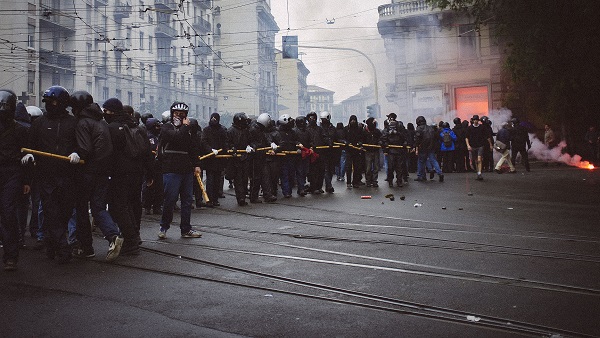 Collectivism, by design and implementation, is tyrannical and destructive, which is why it always leads to such ends.  But the irony of the collectivist belief is that it is presented as a way to achieve freedom, yet it can only be requires the removal of freedom.  Collectivists will ally themselves with any other movement of similar tenets, just as National Socialists (Nazi) did with the Russian Revolutionaries (Bolshevik Communists).  “Communists ally with the Social Democrats.”[1]  And violence is the means:

The Communists distain to conceal their views and aims.  They openly declare that their ends can be attained only by the forcible overthrow of all existing social conditions.  Let the ruling classes tremble at a Communist revolution.   The proletarians [working class] have nothing to lose but their chains.  They have a world to win.

[T]he Communists everywhere support every revolutionary movement against the existing social and political order of things.

Working men of all countries, unite![2]

Shockingly, the very last words of The Communist Manifesto, “Working men of all countries, unite!” is being used even today to rally people around the world to attack America and disparage American Exceptionalism.  Andy Stern, former president of SEIU,[3] has used these very words continually in recent years, “Workers of the world, unite!”  Stern is also true to the Communist violence stance, “We like to say: We use the power of persuasion first. If it doesn’t work, we try the persuasion of power.”[4]

The slogan “workers of the world, unite!” is itself a call to the formation of a collective.   It is by its design an anti-individualist concept.  It proposes that individuals are too weak to stand up for themselves; that only through forming a collective can they wield enough power to make a difference.  This idea is the antithesis of the Great Experiment.   The United States under its limited government puts the individual first, which is the best and strongest form of existence.  The individual in building a strong relationship with his Creator wields absolute power over his own sovereignty.

The National Socialism or Nazism that developed in Germany abhorred individualism.   “The ‘German idea of the state,’…is that the state is neither founded nor formed by individuals, nor an aggregate of individuals, nor is its purpose to serve any interest of individuals.  It is a Volksgemeinschaft[5] in which the individual has no rights but only duties.”[6]  Collectivist organizations (or states) cannot tolerate individualism; therefore, they often pose themselves as something for the “greater good” or “in defense of” some weaker entity, often ironically, the individual.  The Bolshevik[7] Revolution in Russia evolved into one of the bloodiest and most repressive governments in history; and although the United States allied with them in WWII against the Nazis, Winston Churchill vehemently warned America on March 5, 1946 in his famous “Iron Curtain” speech in Fulton, Missouri:[8]

A shadow has fallen upon the scenes so lately lighted by the Allied victory.  Nobody knows what Soviet Russia and its Communist international organization intends to do in the immediate future, or what are the limits, if any, to their expansive and proselytizing tendencies….From Stettin in the Baltic to Trieste in the Adriatic an iron curtain has descended across the Continent.[9]

[3] The SEIU is the Service Employees International union, which is the second largest union in United States and Canada.

[5] From Road to Serfdom – Volksgemeinschaft might be translated as “people’s community,” though under the Nazis it was carried further to imply something like a “racially pure community.”

[7] The Bolsheviks were a faction of the Marxist Russian Social Democratic Labour Party (RSDLP), founded by Vladimir Lenin, which eventually became the Communist Party of the Soviet Union.