How Christian Individualism Rebuilt The World Economy After WWII 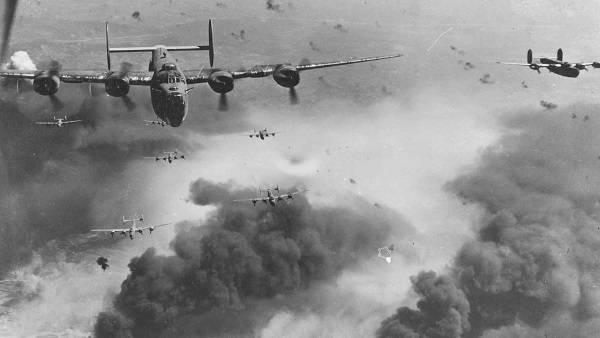 Through flak and over the destruction created by preceding waves of bombers, these 15th Air Force B-24s leave Ploesti, Rumania, after one of the long series of attacks against the No. 1 oil target in Europe. (U.S. Air Force photo)

In the past three articles, I referred to Training Within Industry, TWI – see here, here, and here. During the WWII era, the TWI program released a training manual on economics called the JET (Job Economics Training) manual.

TWI’s JET training adheres to the economic principles of American Exceptionalism, but what does this WWII program have to do with American Exceptionalism and the foundational aspect, Christian Principles and Values, of America?  Was TWI driven only by the industrial need of the United States during the dire situation instituted as a result of WWII; or was it driven by something much deeper and more profound?  The Director of the TWI program during WWII, C.R. Dooley, answers this:

Once again, on Christmas Day we face this age-old problem with confidence that some day, notwithstanding centuries of struggle, groups of individuals will learn the importance of the dignity and true worth of every individual soul, for whom the very existence of any group is but to serve.

The TWI – Job Relations card says, “People must be treated as individuals.”  This is both good Job Relations and the Christian way of life.

May all our Christmas gifts, given and received, remind us of the parts we play as individuals within the group that giving will be the rule some day among organized groups, industry, labor and nations, as it is and always has been among individuals.

The TWI methodology originated back in the early 1800s by a German educator and philosopher, Johann Herbart.  In fact, in an 1896 book on Johann Herbart and his methods, Herbart and the Herbartians, Charles De Garmo discloses that proper education, especially in regard to the pedagogy of Herbart, requires the study of scripture. Specifically, it refers to the study of the Patriarchs, Judges, Kings, the life of Christ, the Apostle Paul, and formation of the church, along with other classical readings and history.[2]

TWI Director Dooley understood the key to this exceptionalism was building a strong individual; and both men received this wisdom from their own Christian Faith – the Foundation of America.

Unfortunately, however, it seems in an age largely ignorant of the past, every couple of generations we have to relearn the forgotten lessons of earlier times.  The tragedy of current federal activism in the name of economic recovery is that our nation’s leaders have either forgotten, or ignored, the accumulating evidence that government efforts to heal sick economies are usually failures.[3]