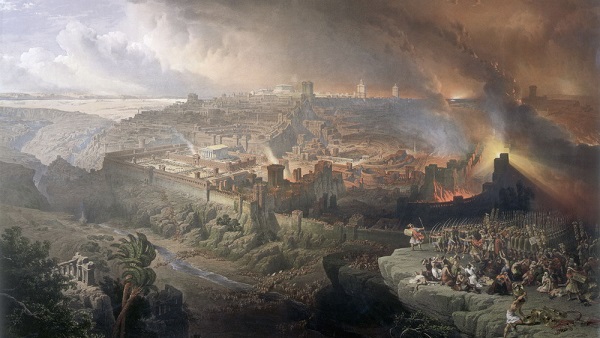 Brian Godawa is a screenwriter (who has written, among other films, the powerfully moving To End All Wars), non-fiction author, movie critic, and novelist. I write today about his novels, particularly the fascinating quadriology about the fall of Jerusalem and the rise and fall of Nero.

I’ve never read historical novels with this much actual history. Godawa’s novels read like bona fide novels, with narrative drive and compelling characters, but literally half of these books is detailed footnotes. You don’t need to read any of them. You can just read the whole compelling, horrific and ultimately hope-giving opus, without ever paging to the back of the book to read actual quotes from Josephus, Philo, Tacitus, etc. backing up every historical claim in the story. But Godawa wanted to make sure that he backed it all up for those of us who are naturally skeptical and want the proof.

Godawa is something called a ‘partial preterist’ which means that a lot of the predictions made in the Bible, which evangelicals in the last century have tended to assume referred to the second coming, are in fact shorter-term warnings about the destruction of Jerusalem. This is a rather common view in church history. In fact, as far as I can tell, the first commentary ever written on the book of Revelation by Victorinus of Poetovio (Commentary on the Apocalypse, which can be read for free here) interpreted the 666 as applying to Nero, not to Hitler nor Gorbachev, Obama nor Trump. That will come as a shock to many of you, so I say, read the footnotes and see if he builds his case.

If you’re not convinced, that’s okay, and we can still be friends. I’m not sure myself. But I am sure that my time spent reading these four novels was time well spent. I learned loads about the era, and I already knew a fair amount, having written a book about it myself. This series worked perfectly for me. My nightstand reading is first some math (duty), then some Bible or Biblical history (wisdom), and then a novel (fun). Godawa helped me combine stage two and three and thereby give me an opportunity to get to sleep a little earlier… except I didn’t go to sleep earlier, because the novels kept me too interested. I got genuinely engaged in these characters.

We live in a period of the scholarly historical novel. Some of them are heavy on the scholarly, but not really novels. That’s okay, I love those “Week in the Life of…” novellas which Intervarsity Press keeps publishing, and we’ll talk about some of those here in the future; but in the case of Godawa’s Chronicles of the Apocalypse, they are thrilling enough to be of interest to someone who has little interest in 1st century history.

One little caveat: There’s this ongoing thing about the Greek word Iudaios, which is often translated as “Jews,” but I think is better translated as “Judeans.” If this is a particular tender area for you, it might grate a little. Brian and I discussed it in the audio below and he made clear that his usage of the traditional translation is not meant as animus. But we live in at time where such things can lead even friends to misunderstand each other, so I wanted to clear the air on that first.

One other thing: It’s not just about history, it’s about theology, so Godawa often opens chapters of the book with quotes from the Book of Revelation, then unfolds right after that, how the story unfolds for his characters in that phase of the prophecy. This illustrates the preterist point beautifully. Fellow preterists and the open-minded will find it interesting, but hard-core committed ‘Revelation-is-about-computer-chips-in-our-foreheads’ folks are likely to blow a circuit or two (hopefully not in any computer chips in their foreheads) when reading the Chronicles of the Apocalypse.

You can listen to our full conversation here.