The Irony Of Socialists Comparing Trump To Hitler 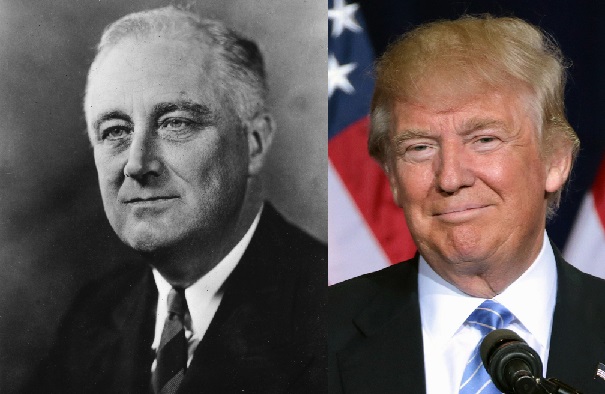 Socialists’ reflex reaction to the election of a Republican president has always been to compare him to Hitler and their treatment of President Trump follows the script. In their minds, he must be the American Hitler because, they claim, he is a racist; he is a capitalist; and he dictates policy instead of consulting socialist experts in federal agencies. Socialists miss the irony in their comparing Trump to Hitler because of their ignorance of history.

The closest the US has come to an American Hitler was President Roosevelt and the left in his day understood it. The evidence comes from their reaction to FA Hayek’s most famous book, The Road to Serfdom. The book came out in 1944 before Roosevelt’s death and socialists in the US saw it as an attack on his policies of central planning so they attacked Hayek for writing it. Several publishers rejected it. But it sold 230,000 copies and a Reader’s Digest version sold 600,000.

Hayek intended the book to correct the delusion in the UK that Hitler’s fascism represented an advanced form of capitalism. Of course, Hitler called his political party National Socialists and in reality, they were the extension of the socialist welfare state dating back to the Bismarck regime, as Ludwig von Mises described in his history of Germany, Omnipotent Government. Hitler’s socialism predated that of Lenin and Stalin in the Soviet Union. Both had the state controlling the means of production. The minor difference between the two was that Hitler’s National Socialism allowed business owners to keep the paper title to their companies while the state dictated what, when and how they would produce and how much they could charge. Hayek described the similarities between communism and fascism this way:

No less significant is the intellectual outlook of the rank and file in the communist and fascist movements in Germany before 1933. The relative ease with which a young communist could be converted into a Nazi or vice-versa was well known, best of all to the propagandists of the two parties. The communists and Nazis clashed more frequently with each other than with other parties simply because they competed for the same type of mind and reserved for each other the hatred of the heretic. Their practice showed how closely they are related.

How did American and British socialists come to think of Nazis as capitalists? Stalin had embraced Hitler as a fellow socialist after their peace treaty, but when Hitler invaded the Soviet Union, he designated Hitler the most evil person a socialist can imagine: a capitalist. Stalin wasn’t stupid. He knew Hitler wasn’t a capitalist. Lenin and Stalin had always labeled their communist opponents capitalists. Doing so signaled their troops to kill them. Calling Hitler a capitalist told the Soviet people that Hitler was not only a threat to them but to all of humanity and must be eradicated.

Socialists in the US towed the Soviet line. They weren’t the least embarrassed about switching from support for Hitler as a comrade to opposing him as a capitalist, one of the greatest flip-flops in history. Hayek wrote Road to Serfdom to explain that Hitler wasn’t a capitalist and that his rise to power was the inevitable result of socialist policies and central planning.

Critics claim that history proved Hayek wrong. Europe and the US adopted central planning but escaped totalitarianism. But Hayek never wrote that any intervention in the economy would automatically produce a dictator. He wrote that authoritarianism will be the natural result if people consistently follow the logic of central planning, because state intervention in the economy does more harm than good in all cases and leads to calls for more intervention.

The lessons of Germany and the Soviet Union repulsed socialists in the US and Europe who recoiled and chose to be inconsistent socialists rather than give up on democracy. Northern Europeans and the US rolled back much of their central planning as their economies collapsed from the weight of it. Southern Europe has continued its attempt to push socialism with disastrous economic consequences.

When Hayek’s book arrived in the US, most people recognized the similarities between central planning and Roosevelt’s New Deal and the left was furious. After all, Hayek had written,

There are many features which were then [15 years earlier] regarded as “typically German” which are now equally familiar in America and England, and many symptoms that point to a further development in the same direction: the increasing veneration for the state, the fatalistic acceptance of “inevitable trends”, the enthusiasm for “organization” of everything (we now call it “planning”).

It may have been the left’s reaction that helped make the book so popular in the US. Road to Serfdom is over 70 years old, but Hayek included a warning that is as appropriate today as in 1944:

It is disquieting to see in England and the United States today the same drawing together of forces and nearly the same contempt of all that is liberal in the old sense. “Conservative socialism” was the slogan under which a large number of writers prepared the atmosphere in which National Socialism succeeded. It is ‘conservative socialism’ which is the dominant trend among us now.

Socialists haven’t learned from history because they don’t know it. They would pluck out their eyes before they read true history. But for those of us who know history, the irony in socialists comparing Trump to Hitler is rich.