Venezuela Elected To The Human Rights Council – You Read That Right 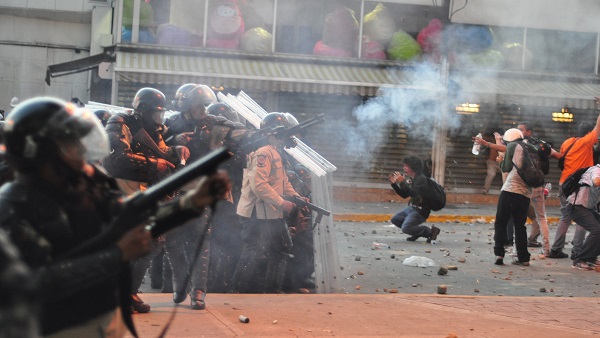 Tear gas used against protest in Altamira, Caracas; and distressed students in Venezuela

Any doubt that the United Nations has failed to live up to its supposed commitment to human rights has been authoritatively dissolved, as Venezuela has won a contested seat on its Human rights Council. Nations such as Cuba and China, blatant and severe violators of human rights, have also served time on the body.

There can be little doubt that the Maduro regime, which remains illegally in power, openly and significantly violates human rights on a massive scale. Over fifty nations have condemned the move.

U.S. Secretary of State Mike Pompeo was outraged. According to his statement:

“The UN High Commissioner report on Human Rights issued this past July documented egregious human rights abuses of the former Maduro regime in Venezuela.  It is sadly no surprise that Maduro shamelessly sought a seat on the UN Human Rights Council in an effort to block any limit to his repressive control of the Venezuelan people.  What is truly tragic, however, is that other nations voted to give Maduro’s representative for Venezuela a seat on the UN Human Rights Council.  This is a harsh blow not just against the victims of the Venezuelan regime, but also against the cause of human rights around the world. The Human Rights Council ought to be a protector and defender of human rights of people the world over.  It should be speaking out about the daily abuses of the former Maduro regime, and others like it.  Instead, the Council has become an exercise in shameless hypocrisy – with some of the world’s most serious offenders sitting on the Council itself.  Its membership includes authoritarian governments with unambiguous and abhorrent human rights records, such as China, Cuba, and Venezuela.  These are among the reasons why the United States withdrew from the Human Rights Council in 2018.”

“No independent government institutions remain today in Venezuela to act as a check on executive power. A series of measures by the Maduro and Chávez governments stacked the courts with judges who make no pretense of independence. The government has been repressing dissent through often-violent crackdowns on street protests, jailing opponents, and prosecuting civilians in military courts. It has also stripped power from the opposition-led legislature.

“Severe shortages of medicines, medical supplies, and food leave many Venezuelans unable to feed their families adequately or access essential healthcare. The massive exodus of Venezuelans fleeing repression and shortages represents the largest migration crisis of its kind in recent Latin American history.

This is the latest example of an issue that continues to rage within foreign policy circles. There is little disagreement that an institution that allows for discussion between nations at odds with each other is truly needed, as is an instrument that facilitates international endeavors aimed at addressing global issues. The increasingly serious question, however, is whether the United Nations, in its current format, can fulfill those needs.

The problem lies in the reality that, pious words aside, the U.N. has no philosophical center, no guiding principles that provide a touchstone for its actions. The concept of debate being superior to combat is a salutary idea, but it has morphed into an acceptance of moral equivalence. Faced with hard evidence demonstrating clear violations of human rights by particular countries, the world body becomes paralyzed and incapable of action. The existence of concentration camps in China, utter despotism in North Korea, or the complete repression of political rights in Venezuela, as well as numerous other examples, results in no substantive response. Indeed, the tendency, particularly in the General Assembly, of anti-western, anti-Semitic, and anti-economic freedom paradigm noticeably restrains any truly viable response.