The Great Conservative Crack-Up Over China 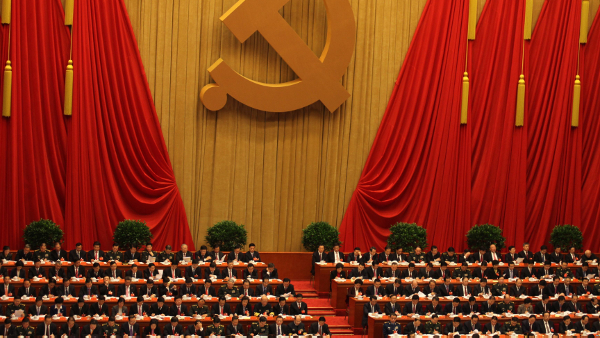 18th National Congress of the Community Party of China (2012)

Gordon Chang is the author of a book titled The Coming Collapse of China. This likely explains why editorial pages and cable news shows frequently seek his thoughts on the country. Alarmism sells, and Chang brings it about China in spades.

Evidence supporting the above claim comes care of an opinion piece Chang penned for the Wall Street Journal last week, which was titled “The Great Confrontation With China.” Chang is a bit dramatic when it comes to the country he’s convinced the “Trump administration is heading for a fundamental break with.” See above.

His opinion piece brought new meaning to drama, including Civil War imagery…Even though an American visitor to China would be bowled over by how very American it is, with U.S. brands everywhere one looks (this is increasingly true in the poorer cities too), Chang’s franchise is rooted in immense hatred between the U.S. and China. In the above-mentioned opinion piece, Chang cherry-picked a declaration from People’s Daily about a “’people’s war’ on the U.S.,” referenced trash talk by Chinese servicemen speaking “gleefully in public about sinking U.S. Navy vessels,” plus titillated readers with hints from Chinese ruler Xi Jinping that “China is the world’s only legitimate state.”

Chang is up in arms about all this, he’s long been this way, and he’s got an Administration headed by one Donald Trump that shares his views. China is the enemy! Its people hate us if Chang is to be believed, there’s a “people’s war” taking place against the U.S., but a visit to the country reveals something entirely different. Again, everywhere one looks there are U.S. brands prospering as they sell their services, wares, food, drinks and seemingly everything else to an increasingly acquisitive population that is conducting a love affair with all things American.

Basically market signals belie Chang’s paranoid analysis of the country, and that’s somewhat the point: Chang is paid for his opinions, which means he can be routinely incorrect without consequence for anyone. Businesses can’t be so cavalier, nor can CEOs of same. It’s not enough for them to have opinions. They must operate in the realm of the real, and as such they continue to expand their operations in China.

For instance, Starbucks presently has 3,400 stores in China with plans for 7,000. No doubt top executives at the Seattle-based coffee giant have all manner of personal opinions about China and other countries, some of those opinions may mirror those of Chang, but unlike with Chang the practical must always trump the emotional. This may explain why so many who are paid for opinions routinely make a case for China being the “enemy” at the same time that businesses, working for shareholders, operate as though the opinion writers don’t exist. American businesses plainly see in China what the chattering classes don’t.

This helps explain why it would be unwise to seek insights from Chang about matters economic or commercial. There’s an empirical quality to the economic and commercial that doesn’t pair well with hysteria. Chang surely feels a lot when it comes to China, but businesses don’t have the luxury of just feeling. They must once again be right. And so they continue to expand in a country that Chang is certain will “collapse.”

That Chang is certain of the country’s “coming collapse” raises an obvious question: why is he so worried? Particularly in consideration of his certainty that “Mr. Xi” is “recombining already large state enterprises back into formal monopolies and duopolies, reversing the partial privatization of earlier years, having the state buy shares in listed private companies, shoveling more state subsidies to favored state businesses, exercising tighter control over price movements in equity markets, and pursuing development through antitrade industrial policies such as his Made in China 2025 initiative.”

Chang is figuratively sweating about China establishing itself as the only “legitimate state,” but it’s hard for countries to do that when they’re suffocating the private sector, which is what China’s political class is doing if Chang is to be believed. This is where Chang’s limited knowledge of simple economics limits his ability to analyze the China of the present and future. He plainly believes the “shoveling” of subsidies to private businesses improves those businesses, but logic and commercial history collide with what Chang feels. Subsidies exist as a weight on business success precisely because they enable delayed realization of errors without which there is no commercial progress. A reversal of “partial privatization” wouldn’t render Chinese businesses more dynamic as Chang alludes, rather more state control would asphyxiate them. Investors in private companies exist as crucial sources of market and strategic knowledge, but per Chang the state is increasingly crowding out private investment in Chinese firms, not to mention that “tighter control over price movements in equity markets” would blunt the very price signals that speed along the replacement of the bad and mediocre with the good and great. If the U.S. political class exerted “tighter control over price movements in equity markets,” then GE would still be the most valuable U.S. company, AOL and Yahoo would rule the internet roost, and Lucent would be the gold standard for U.S. communications.

The companies mentioned in the above paragraph were among the bluest of blue chip firms when the 21st century began, but now they’re afterthoughts. And that’s the point. The brilliant economic strength of the United States is a consequence of a lack of state control. Chang claims there’s immense state control in China which, if true, means the country poses no economic or commercial threat to the paranoid among us. And for the rest of us who don’t see trade as war as Chang clearly does, Chinese businesses will sadly not meet our needs as expertly as they have in the past if the author is right about an increasingly muscular state in the present and future. That’s too bad for free thinkers. As for Chang, he again needn’t worry. What gives him nightmares rooted in Chinese economic supremacy is exactly what will exist as a barrier to it.

Which brings us to Chang’s assertion that “Mr. Xi” has “aggressively pursued” the “’great rejuvenation of the Chinese nation’” by “relentlessly closing off the Chinese market to foreign competitors…” Ok, it should first be said that closed markets invariably weaken nations economically simply because they exist as barriers to the very individual specialization that powers growth. Chang gets this backwards. The closing off of China would shrink China, not expand it as Chang’s analysis presumes. Which calls into question Chang’s analysis.

Indeed, if Mr. Xi is truly shutting off Chinese markets, you wouldn’t know it from the growing sales of U.S. businesses in the “relentlessly” closed off country. Figure that Apple sells 1/5th of its iPhones in China, Boeing a quarter of its planes, GM sells more cars in China than it does in North America, China is the second largest market for Nike, McDonald’s, for the U.S. entertainment industry, and surely countless others. Chang yet again feels Mr. Xi has shut down access to the country’s markets, but U.S. businesses continue to expand their operations there. Starbucks, as mentioned previously, is set to double the number of stores there.

All of this might explain why U.S. equity markets routinely correct whenever it becomes apparent that Chang’s foreign policy and economic idol in Trump threatens tariffs against China. Investors fear a Chinese response that would limit the ability of American firms to sell into one of the fastest growing markets in the world. But wait a minute, if Chang is to be believed the state is massively exerting control over the Chinese economy. But is it? Wouldn’t such a scenario, if remotely true, result in collapsing global markets owing to how government control invariably crushes economic vitality? Market signals thoroughly reject what Chang feels about the country, but then Chang isn’t guided by markets as is readily apparent to those who endure his commentary. It’s all feel.

Speaking of, that book Chang wrote about China’s “coming collapse” was published in 2001….Translated, Chang’s feel for China has been impressively incorrect for close to twenty years, and if his latest commentary is at all indicative of his grasp of what authors economic growth, Chang’s batting average on the matter of China isn’t about to improve.