Starting At The Right End Of The Climate Debate 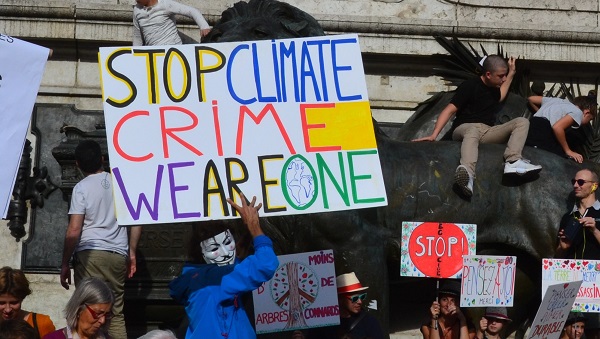 Climate change protesters in the streets of Paris.

Climate politics has been ratcheting up again recently, accompanying yet another international climate hysteria fest, so it is worth revisiting. In most cases, discussions begin and end with arguments about what the science does or does not say. That is the wrong place to start. Instead, begin with the political endgame and work back from there. As with every program, there is an underlying logic, a rationale that can be outlined, analyzed, and dissected. For each step, there is a “because” that supports an assertion. The “because” is the most interesting and telling.

The hoped-for culmination of all of the jockeying is that a body of unelected, unaccountable international politicians achieve the authority to impose draconian economic policies on developed countries and social engineering on a massive scale, because they are trustworthy and would never abuse their power. They must use that authority because average global temperatures must be limited to 1.5 degrees Celsius above pre-industrial levels and because they know that economic freedom and human prosperity are the underlying causes of warming.

This must be done because pre-industrial temperatures are the appropriate starting point, because 1.5 degrees is the maximum allowable rise, and because above that there will be global catastrophe. They know that because their climate models can predict the future. They believe that they are correct and appropriate to use as justification for such policies because some of the assumptions rely on generally accepted scientific theories, because data has been collected by various scientific methods covering a long period of time, and because they know the data to be accurate, reliable, unbiased, and appropriately used only by unbiased, honest people.

Though this is necessarily a shortened list of assertions and associated rationale, they are at least as important as the underlying science, and they invite challenges every step of the way. The first concern is how much we, as independent, market-based societies that value economic freedom, should trust the opinion of and give authority to organizations whose leadership is blatantly anti-capitalist, anti-progress, and bent on international socialism and redistribution on a global scale, the disastrous fixed-pie mentality.

The starting point for temperature rise is not arbitrary. It is the end of the Little Ice Age, an extended period of unusually cold weather. Rising temperatures are exactly what one would expect. The Medieval Warm Period was an extended time of unusually warm weather under which societies flourished. These things are not unprecedented by any means.

Climate models are, as are all models, based on the assumptions programmed by model builders. As long as reality emerges exactly the way they are programmed, models can tell us what to expect. Over the next 50 or 100 years, natural and social events will drastically change the environment, societies, technologies, and economies, making changes in trends unpredictable and uncontrollable.

The models also assume that all relevant factors are taken into consideration and properly weighted, but even the modelers themselves admit that there are significant factors that they don’t understand, such as cloud cover. The historical data upon which the models and trends are built have also become suspect. A wide swath of data points have been adjusted that make it look like the past was colder and the present warmer. We have no guarantees that bias was not introduced. With stations that have been in place for decades, that have not been adjusted, and which are not located in growing urban heat islands, the temperatures show no warming.

There certainly are many sincere, competent, well-meaning scientists involved in the study of global climate, and that is good. There are, however, far too many politicians involved, along with their perverted incentives and purse strings, and that is not a good thing.