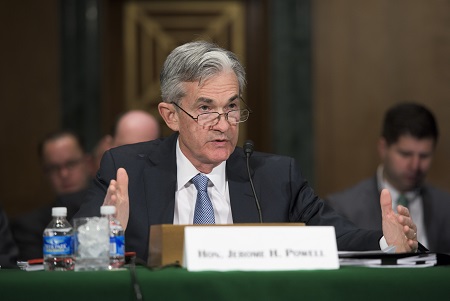 Governor Jerome H. Powell testifies before a joint hearing of the Senate Banking Subcommittee on Securities, Insurance, and Investments and the Subcommittee on Economic Policy in Washington, D.C., on April 14, 2016.

The US Federal Reserve reduced its target rate by half a percentage point to a target range of 1% to 1.25%, in response to likely economic weakness arising from the coronavirus outbreak. Goldman Sachs’ GDP tracking model now projects negative GDP growth in the US during the second quarter. The US stock market initially surged but was roughly unchanged around 10:20 a.m.

Overnight, the Group of Seven (G7) finance ministers offered no concrete fiscal measures, promising only to monitor the situation. US banks were the worst performers, with Bank of America trailing the S&P 100 Index with a loss of more than 2%. Gold rose by nearly 2%, and the 30-year Treasury bond price was up by more than a percentage point.

Monetary policy has only symbolic value for an economy subject to shocks to retail spending, which makes up two-thirds of the US economy. Capital investment was negative during 2019 as the industrial economy shrank, largely because of the US-China trade war. A virus outbreak that empties the shopping malls could provoke a contraction of GDP later in the year. No-one knows how extensive the spread of Covid-19 might be.

Last week I argued that the G7 should respond with a massive fiscal stimulus, putting as much money directly into the pockets of wage-earners as possible, for example by suspending the collection of Social Security taxes. Monetary policy has little impact. Commercial and industrial loans at US commercial banks have been shrinking for the past three months in any case, and cheaper funding from the Fed won’t persuade banks to lend more to businesses suffering cash flow shrinkage due to an epidemic.