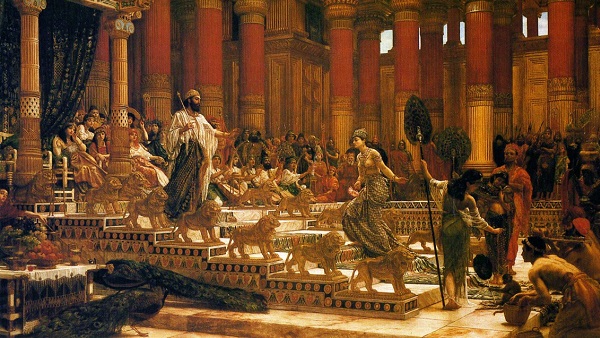 The Visit of the Queen of Sheba to King Solomon, oil on canvas painting by Edward Poynter, 1890

Solomon mentions a kind of “toxic femininity” pretty early in Proverbs (2:16) but his focus is young men: “Hear, my son, your father’s instruction, and forsake not your mother’s teaching, for they are a graceful garland for your head and pendants for your neck” (Proverbs 1:8–9 ESV). In Proverbs, the term of choice for a “toxic male” is a fool, closely followed by sluggard and simpleton.

Society needs productive men and women. What seems weird is that public handwringing over “toxic masculinity” is accompanied by offering strange alternatives that don’t seem productive of anything except chaos. Glenn Stanton at The Federalist recently documented how The Atlantic has been crusading for years to detoxify masculinity by bizarre means. For example:

“[…] The Atlantic also warned that “Today’s Masculinity Is Stifling.” Of all the ways it could have addressed the topic, The Atlantic enlisted a male pretending to be a female giving advice to real dudes and the women who love them. But this article took a special turn, illustrated with this image of an adolescent boy considering whether wearing a dress might be right for him.

“It’s largely a celebratory article on the author’s son deciding to wear, as she describes it, a “gray cotton sundress covered in doe-eyed unicorns with rainbow manes” to school. The Atlantic would like us to know that masculinity would be so much better and less stifling if people saw her son’s behavior as totally normal.”

A mother recently wrote in a plea for everyone “to stop lying about our sons.”

I never thought we would reach a point where it was commonplace to hear social commentators, journalists and presidential candidates awfulize boys and men — our fathers, brothers, husbands and sons — simply because they are male. There were always those fringe women’s studies professors and radical feminists who made their living by hating on men but I couldn’t have imagined that such ugliness would infect the public discourse and be lauded as brave, let alone enlightened.

In our current culture, why would even an atheist turn to the modern media to find wisdom for young males over the book of Proverbs?

As a book explicitly addressing how to become a mature man, Proverbs repeatedly begs young men to listen to both their fathers and their mothers. Proverbs 1:8 is only the beginning. Here are some other proverbs advising sons to listen to their mothers:

This even-handedness was recognized by John Locke and was part of his defense of liberty against monarchic (and male) absolutism. It is part of our Western heritage, for those who care.

Beyond all these passages and others, the last book in the collection we know as Proverbs has a female author:

Her warning to King Lemuel includes other temptations that might obstruct him from being a good king who provides justice for those in need. But she returns to and focuses on how he relates to women. While Lemuel needs to stay away from women who would rob his strength, he needs to choose a different kind of woman to be his queen—a strong woman in every sense:

An excellent wife who can find? She is far more precious than jewels. The heart of her husband trusts in her, and he will have no lack of gain… She dresses herself with strength and makes her arms strong… Strength and dignity are her clothing, and she laughs at the time to come… (Proverbs 31:10, 11, 17, 25 ESV).

Proverbs personifies both Wisdom and Folly as women who are both recruiting (see especially chapter 9). One wants self-supporting adults and the other violent and self-sabotaging perpetual children. It’s hard to see how the importance of women to encouraging or discouraging virtue in boys could be emphasized more than it is in Proverbs.

“Trans men” grieving that society doesn’t accept boys in unicorn dresses isn’t helping us. Proverbs is superior by any metric if we want to be a society run by grown-up men and women.