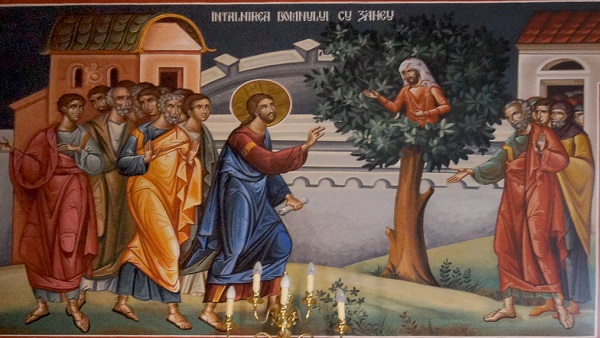 In our ongoing series about Jesus’ model for economic engagement during His earthly ministry, we look next at the encounter with Zacchaeus, the chief tax collector. Here’s Luke’s description:

And there was a man called by the name of Zaccheus; and he was a chief tax collector, and he was rich…

…when Jesus came to the place, He looked up and said to him, “Zaccheus, hurry and come down, for today I must stay at your house.” And he hurried and came down, and received Him gladly. And when they saw it, they all began to grumble, saying, “He has gone to be the guest of a man who is a sinner.” And Zaccheus stopped and said to the Lord, “Behold, Lord, half of my possessions I will give to the poor, and if I have defrauded anyone of anything, I will give back four times as much.” And Jesus said to him, “Today salvation has come to this house, because he, too, is a son of Abraham. “For the Son of Man has come to seek and to save that which was lost.”

We see the (by now) very familiar pattern: Jesus hangs out with recognized sinners. These sinner really are sinners. Jesus accepts material support, gifts and/or patronage. Critics grumble. The sinner is restored.

Note, by the way, that it is Jesus alone who is described as seeking this invitation. ‘I must stay at your house’ is not ‘we must stay at your house’.  Zaccheus ‘received Him’, not ‘received them’. In other words, the text suggests that Jesus’ disciples were not compelled to go so far out of their comfort zone as to dine with this arch-sinner. The grumblers accused Jesus and His disciples ‘Why do you (pl.) eat and drink with sinners…’.  (Lk. 5:30) Apparently, eating with ordinary tax collectors when they are part of a broad banquet is something the disciples can handle, but eating at the home of a chief of the system is too much.

Let’s get a bit deeper on the matter of patronage. The word used to describe Jesus being ‘received’ is explained here:

The verb for welcome (v. 2) is prosdechomai, which may denote more than simply entertaining guests. Elsewhere it is used in context of financial provision and social honour (cf. Rom. 16:2 and Phil. 2:29; so Marshall 1978: 599).

Often those received would get all their meals, a roof over their heads, perhaps some financial provision while there, and traveling money afterwards. It’s more than a quick lunch together.

This explains the crowd’s objection to some degree. They are likely following the pharisaical teachings that benefiting from the wealth of a publican makes one also guilty.

The crowd, however, interprets the scene in diametrically opposite fashion (v. 7), for, from their perspective, ‘to stay in such a person’s home was tantamount to sharing in his sin’ (Marshall 1978: 697).

Why does the sin transfer from the ill-getter of the gain to the secondary recipient? Because the wealth itself is seen as tainted, not just the deed by which it is gotten.

Whereas the crowds see Jesus accepting the hospitality of a man whose wealth is ill-gotten as becoming a partner with him in his crimes (Derrett 1970: 281–282), Jesus believes that godly character and righteous living can be modelled and have a positive impact by rubbing off on others as they commit to change their ways.

Once again we see that with the coming of God in the flesh, it is righteousness which is ‘catching’, not sin. Jesus is infectious to those whom He touches, not the other way around.