Paul On Meat Sacrificed To Demons vs. Mandatory Market Disengagement 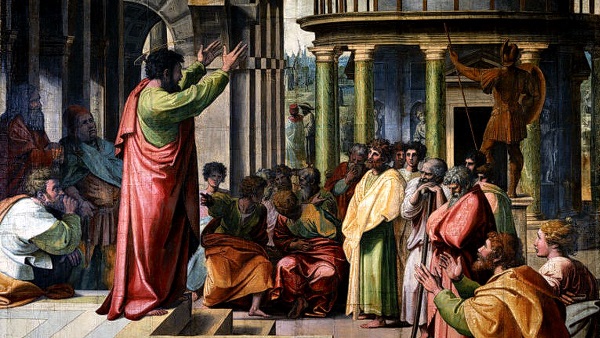 There is no controversy in the New Testament which I think better illustrates our broad freedom in Christ when we go into the marketplace than the controversy over meat sacrificed to idols. I daresay that the Christian mindset is such that, if we did not have these passages in the Bible, we would have a strong consensus against freedom in such matters. I say this based on years involved with Christian radio and television ministry, where I found that the surest way to fill the call-in lines on a slow day was to ask a question of the form: “Are Christians allowed to X?” Do yoga; listen to secular music; see R-rated movies; celebrate Halloween; and (believe it or not, in my recent years) celebrate Christmas. Inviting Christians to judge other Christians about debatable practices was sure to keep the lines full and, in general, the forbidders had the freedom crowd on the defensive.

Try to imagine that Romans 14 and 1 Corinthians 10 were not in your Bible and I went on the air and asked if Christians were allowed to eat meat sacrificed in pagan temples as offerings to demons. Based on my experience, it would be a complete shut-out. Of course we should never do such a thing! And yet Paul not only permits it, but even goes so far as to treat it as a given, going on to argue only about the manner in which one uses this freedom.

Eat anything that is sold in the meat market, without asking questions for conscience ‘ sake; for the earth is the Lord’s, and all it contains. If one of the unbelievers invites you, and you wish to go, eat anything that is set before you, without asking questions for conscience ‘ sake. But if anyone should say to you, “This is meat sacrificed to idols,” do not eat it, for the sake of the one who informed you, and for conscience ‘ sake; I mean not your own conscience, but the other man’s; for why is my freedom judged by another’s conscience? If I partake with thankfulness, why am I slandered concerning that for which I give thanks? Whether, then, you eat or drink or whatever you do, do all to the glory of God.”

Just in case you missed the highlighting, we’re not just talking about meat sacrificed to idols. Paul says that these idols are not gods (of course) but goes on to say that they are demons. This is demonically devoted meat and Paul is surprised that he would be judged (slandered) for eating it. That’s how deeply the early church had imbibed the Jesus message of contagious holiness and freedom of conscience and association.

In researching this topic I noticed something which I had missed before.

But take care lest this liberty of yours somehow become a stumbling block to the weak. For if someone sees you, who have knowledge, dining in an idol’s temple, will not his conscience, if he is weak, be strengthened to eat things sacrificed to idols? For through your knowledge he who is weak is ruined…And thus, by sinning against the brethren and wounding their conscience when it is weak, you sin against Christ. Therefore, if food causes my brother to stumble, I will never eat meat again, that I might not cause my brother to stumble.

Did you see that? This is not just a discussion about buying meat in a third-party meat market at the retail level which had been wholesaled by a pagan temple, though that is part of it. This is a discussion about ‘dining in an idol’s temple.’ This is about a Christian walking into a pagan temple, probably that of the pornographic demoness Aphrodite, and sitting down and buying lamb which had just been devoted to her.

This is pretty devastating to any form of moral absolutism about boycotts at the consumer level. But what about the other side of the transaction, the Rabbinical idea that one should not benefit from sinfully gotten gains? Well, that also is severely challenged by the facts. To understand why, let’s take a look at who is actually administering these temples. Here’s Cicero on the duties of the Aedile (in Latin) or Oeconomicus (in Greek):

Cicero (Legg. iii. 3, 7) Care of the city: the repair and preservation of temples… Care of line games: superintendence and organization of the public games…

According to the Encyclopedia of Ancient history, the duties also included festivals (which were thoroughly pagan).

“But most importantly, they were placed in charge of the many annual festivals and public games. ”

So, pagan temples, pagan games, and pagan festivals were under the authority of this officer. So, just who was that, specifically in the context of Corinth at the time? Meet Erastus, close companion of Paul:

Now after these things were finished, Paul purposed in the spirit to go to Jerusalem after he had passed through Macedonia and Achaia, saying, “After I have been there, I must also see Rome.” And having sent into Macedonia two of those who ministered to him, Timothy and Erastus, he himself stayed in Asia for a while.

Erastus remained at Corinth, but Trophimus I left sick at Miletus.”

And he was also the Aedile of Corinth, i.e., the City Treasurer:

I, Tertius, who write this letter, greet you in the Lord. Gaius, host to me and to the whole church, greets you. Erastus, the city treasurer greets you, and Quartus, the brother.

That’s right, the evidence points to a shocking set of facts. Not only were Christians permitted to do business with these pagan temples, to buy from them and eat in them, but the man who had them as one of the departments under his oversight was a Christian, on good terms with Paul.

And apparently, he felt no shame in this role, as we have recently found the Erastus Stone, a monument which he laid at his own expense as a gesture of thanks to the people of Corinth for choosing him as their Aedile, laid in the theater district no less.

Instead, the unifying theme that emerges from the passages surveyed in this chapter is one that may be called ‘contagious holiness.’ Jesus regularly associates with the various sorts of sinners on whom the most pious in his culture frowned, but his association is never an end in itself…

Implicitly or explicitly, he is calling people to change their ways and follow him as their master. But unlike so many in his world (and unlike so many cultures throughout the history of the world), he does not assume that he will be defiled by associating with corrupt people. Rather, his purity can rub off on them and change them for the better. Cleanliness, he believes, is even more ‘catching’ than uncleanness; morality more influential than immorality.

Early Christians were, by the standards of current separation mindset, shockingly outward-looking, and free to associate. But they were not free for no reason. Their freedom, like Jesus’, was for a purpose: to actively engage, to confront, call, invite, instruct and transform their world. We can engage without fear of contamination by unholiness because we are the ones with the most powerful contagion, the Spirit of Holiness.