Solomon And The Pandemic 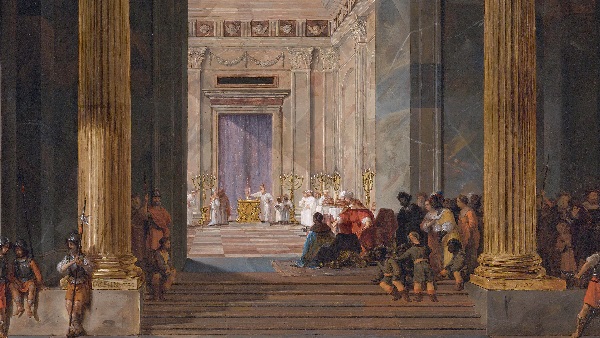 The Queen of Sheba before the temple of Solomon in Jerusalem
by by Salomon de Bray.

In my new book on reading Proverbs and growing in wisdom (Athanasius Press), I spend a whole chapter dedicated to showing that the message of Proverbs is the same as the message of Ecclesiastes.

Consider this essay by Susan Neiman, which begins with this sentence: “I am a philosopher who believes that Western philosophy begins not with Plato, but elsewhere, and earlier, with the Book of Job.” Neiman’s driving reason is the way the book deals with the problem of evil. But I think certain features of the book lend itself to be classified as a philosophy text, or at least a proto-philosophy text.

You may not know this, but most of the Bible presents itself as a history. Either it narrates past events (the patriarchs, the history of Israel, the story of Jesus and the start of the church in the Roman Empire) or it gives us documents that only make sense in a historic context (the prophets and the epistles). Job has some historical indicators, but it doesn’t seem to be as essential to that overarching narrative. It reads like a story designed to deal with an abstract problem.

To some degree, all “wisdom literature” that came from Solomon and others seems to be less interested in the narrative history. Authorship is established in Proverbs and there are a few references to Israel’s situation with the hereditary land and the sacrificial system. But it’s not as much as the rest of the Bible.

Ecclesiastes is even more abstract. Other than establishing the author was the wise king of Jerusalem, it is basically a letter to humanity. To paraphrase: “I’m Solomon and I want to speak to you about the human condition.” There’s nothing else like it in the rest of the Bible!

And what is the human condition?

Vapor of vapors, says the Preacher, vapor of vapors! All is vapor. What does man gain by all the toil at which he toils under the sun? A generation goes, and a generation comes, but the earth remains forever… It is an unhappy business that God has given to the children of man to be busy with. I have seen everything that is done under the sun, and behold, all is vapor and a striving after wind (Ecclesiastes 1:2-4, 13b–14 ESV).

The world is vapor and chasing the wind. Traditional English translations change the concrete vapor to “vanity” or worse to “meaninglessness.” But, as Jeff Meyers argues in his commentary (Athanasius Press), the word is mist or vapor. In the New Testament, James appealed to Ecclesiastes when he wrote,

Come now, you who say, “Today or tomorrow we will go into such and such a town and spend a year there and trade and make a profit”—yet you do not know what tomorrow will bring. What is your life? FOR YOU ARE A MIST that appears for a little time and then vanishes. Instead you ought to say, “If the Lord wills, we will live and do this or that” (James 4:13–15 ESV; emphasis added).

I spent some space in my book showing that Proverbs does not disagree with Ecclesiastes, including using the term vapor in the same way (for example, Proverbs 21:6 in the ESV). I did this because I find many make Proverbs into a kind of “health and wealth” message, in which we are guaranteed rewards if we do good works. Proverbs is far more complicated than that! The fact that the book continuously pleads with the reader not to be seduced by the prosperity of the wicked should alert you to the flaw in that characterization of Proverbs. Solomon does believe God bestows blessings on the wise and righteous, but the greatest blessing one could have is Wisdom. If one gets wisdom one can never claim that God has been stingy! Solomon’s own story is one of prospering because he cared more about wisdom than prosperity (1 Kings 3:5-14). Jesus later summed up the lesson in the Sermon on the Mount by telling his disciples to “not be anxious, saying, ‘What shall we eat?’ or ‘What shall we drink?’ or ‘What shall we wear?’ For the Gentiles seek after all these things, and your heavenly Father knows that you need them all. But seek first the kingdom of God and his righteousness, and all these things will be added to you” (Matthew 6:31-33).

But what does Solomon mean that our labor is vapor and chasing the wind? Here is Solomon’s most succinct summary:

Again I saw that under the sun the race is not to the swift, nor the battle to the strong, nor bread to the wise, nor riches to the intelligent, nor favor to those with knowledge, but time and chance happen to them all. For man does not know his time. Like fish that are taken in an evil net, and like birds that are caught in a snare, so the children of man are snared at an evil time, when it suddenly falls upon them (Ecclesiastes 9:11–12 ESV).

That is true of each person. It is true of nations. And it is true of global superpowers and worldwide civilizations. Things happen. Storms. Wars. Economic collapses.

We can grow powerful and gain knowledge beyond anything we dreamed before. But we will never be in control of our lives. Time and chance happen to us all.

The question is: How will we deal with the condition of our existence? Ecclesiastes has an answer for us. The Bible, as a whole, has an answer.

But we can’t evaluate or appreciate an answer if we deny the question exists.

As our lives are suddenly turned upside down by the coronavirus, maybe we can gain one advantage amid all the carnage: We can realize life is vapor and striving after the wind.

If you want to make God laugh, tell him your plans.