The Significant Economic Contrast Between The 1920s And The 1930s 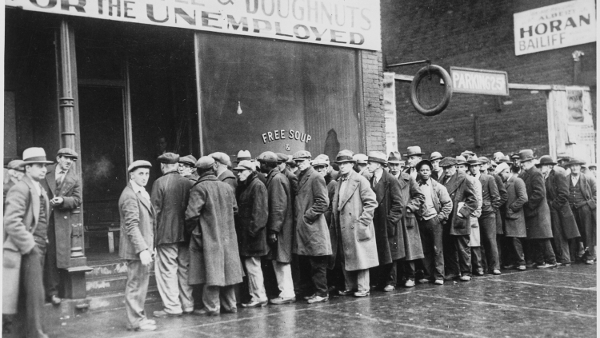 The comparison and contrast economically between the 1920s and the 1930s is significant. It is a comparison between: embracing American Exceptionalism (1920s, Coolidge-Harding) and rejecting American Exceptionalism (1930s, Hoover-Roosevelt); an adherence to the Great Experiment (1920s, Coolidge-Harding) and a denunciation of the Great Experiment (1930s, Roosevelt-Hoover).

The 1920s illustrates the brilliance of the Shining City, while the 1930s illuminates the dimming of the Shining City. It is free-market capitalism in opposition to centrally planned collectivism. Perhaps the juxtaposition is best characterized by the renowned historian of the Great Depression, Murray Rothbard:

Hence, awakening from the pipe dream was bound to be painful, and it is not surprising that by the end of the day on October 24th, eleven men (well-known on Wall Street) had committed suicide. The immediate panic subsided on November 13th, at which point the index had fallen from 452 to 224. That was indeed a severe correction but it has to be remembered that in December of 1928 the index had been 245, only 21 points higher.  Business and stock exchange downturns serve essential economic purposes. They have to be sharp, but they need not be long because they are self-adjusting. All they require on the part of the government, the business community, and the public is patience. The 1920 recession had adjusted itself within a year. There was no reason why the 1929 recession should have taken longer, for the American economy was fundamentally sound. If the recession had been allowed to adjust itself, as it would have done by the end of 1930 on any earlier analogy, confidence would have returned and the world slump need never occurred.

Instead, the stock market became an engine of doom, carrying to destruction the entire nation and, in its wake, the world.[1]

Economic history gives clarity to the America which, not only illustrates what American can and has accomplished, but also what the move away from economic liberty does to the American economy. Which path should we move forward with? Which will the 2020s reflect – the 1920s or the 1930s? It is not a difficult decision.