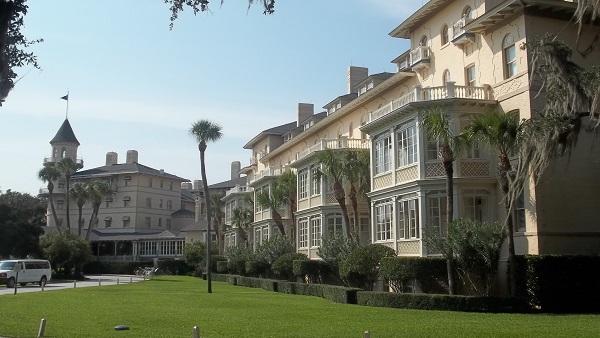 The construction of the Federal Reserve began as an undercover operation when Rhode Island Senator Nelson Aldrich called a secret meeting at the Jekyll Island Clubhouse on Jekyll Island, Georgia (see Photos 1 and 2).  Six men, including Nelson, Assistant Secretary if the Treasury A. Piatt Andrew, and four of the most powerful bankers in the United States, Henry Davidson of J.P. Morgan & Company, Paul Warburg of Kuhn, Loeb & Company, Frank Vanderlip of National City Bank, and Benjamin Strong of Bankers Trust Company, would board a private train to be secretly whisked away to the Atlantic Coast island for the secret meeting in 1910.  Frank Vanderlip would note that “When I came to that [train] car the blinds were down and only slender threads of amber light showed the shape of the windows…We proceeded, in the rear room of the private car, to get to work as soon as the train was moving.”  Vanderlip continues:

That first discussion of the banking structure and of what ought to be done about it produced scraps of ideas as formless as the contents of a rag-bag. Every one had some little piece of a project to throw on the table for discussion and every one’s pet scheme encountered some other fellow’s objection.

Vanderlip explains what proceeded once that were “completely secluded” on Jekyll Island:

We put in the most intense period of work that I have ever had.  Sometimes Davidson and Strong would be up at day-break to get a horseback ride, or a swim before breakfast, but right after breakfast the six of us would gather around the table [see Figure 8] and resume where our discussion had ended the previous midnight…It was entirely thrilling…There can be no question about it:  Aldrich undoubtedly laid the essential fundamental lines which finally took the form of the Federal Reserve Law.[1]

In fact, looking at history and the false construct of the need for Central Bank one only needs to reference the result of the shutdown of the First Bank of the United States when its charter expired in 1811.  “Many persons viewed a dissolution of the late Bank of the United States as a national calamity,” notes Tom Woods.  Quoting Dr. Adam Seybert, U. S. Congressman from Pennsylvania, from 1816, “it was asserted that a general bankruptcy must follow that event.  The fact was otherwise:  every branch of industry continued uninterrupted – no failures in the mercantile community were attributable to that occurrence.”[2]