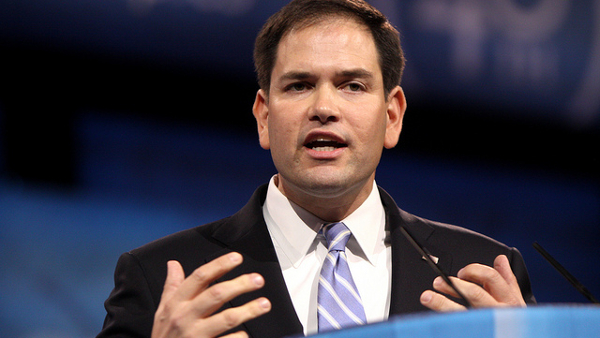 How many readers of this piece were demanding Zoom before its software was launched in 2013, or Postmates before drivers in its employ began meal delivery in 2011, or transportation at the touch of a button before Uber began operating in 2009? Traveling further back in time to the mid-1990s, how many readers were demanding books that would arrive at their door after buying them “online” on Amazon, or for that matter, how many were demanding internet services and “websites” to begin with?

It’s worth asking in consideration of Sen. Marco Rubio’s latest emotional outburst in the form of an op-ed in the New York Times. Seemingly still trying to come to terms with how little voters took to him during his 2016 run for the Republican presidential nomination, Rubio continues to search for a policy raison d’etre through cloying opinion pieces that only succeed insofar as they remind us how lucky we are he never came close to the White House. That’s the case not because Rubio’s policy musings are ludicrous, though they are, but because individuals this needy shouldn’t be heading the most self-reliant nation on earth. Rubio writes:

“Over the past several decades, our nation’s political and economic leaders, Democratic and Republican, made choices about how to structure our society — choosing to prize economic efficiency over resiliency, financial gains over Main Street investment, individual enrichment over the common good.”

Books could be written….

Oh well, and with brevity somewhat in mind, it should be stressed that the U.S. economy was until recently the world’s most dynamic precisely because emotional puddles like Rubio were not making “choices about how to structure our society.” Some will say it’s because Rubio lacks any real world experience, others will just say he’s bereft of common sense, still others will say Rubio’s ghostwriter lacks any real economic understanding, but the why of Rubio really doesn’t matter. The Times’ piece is in Rubio’s name, and it naively presumes that brilliant economic outcomes that enable employment and living standards that are the envy of the world, can somehow be planned or “structured” by politicians.

In truth, it’s the present economy defined by tens of millions suddenly jobless that has the fingerprints of people like Rubio all over it. Desperate to be seen “doing something,” desperate to be needed, politicians of Rubio’s ilk insulted every American by presuming we all needed to be forced by politicians to avoid potential illness in rare instances, or death under the rarest of circumstances. The “structure” put in place by the political class that Rubio’s a fairly senior part of was to foist mass unemployment and bankruptcy on the people whom Rubio et al deemed a menace to other people. You can’t make this up. Using Rubio’s own words in a different way, “our nation’s political and economic leaders, Democratic and Republican, made choices about how to structure our society” that has resulted in desperation for millions of Americans.

Politicians did this. In response to a virus, the political class foisted economic contraction on the American people, only to then extract trillions more from them so that they could throw money at what they broke.

In short, the Senator has it backwards. Before March of this year, Republicans and Democrats had done very little structuring of the economy. Evidence supporting the previous claim? The economy’s remarkable dynamism, that proved a magnet for investment from around the world.

Which brings us to Rubio’s line about politicians allegedly choosing “efficiency over resiliency, financial gains over Main Street investment.” Rubio should fire his ghostwriter, himself, or perhaps both. Indeed, it seems he’s unaware that the financial flows he resents are what make the “resiliency” he prizes possible in the first place. Think about it. And then think about it some more.

Could the political class of 1995 have shut down the economy in the way that Rubio et al did in 2020, and could they have cheered American resiliency in the face of staggering political ineptitude care of politicians? Not on your life. The U.S. economy couldn’t have been shut down simply because the Wall Street that Rubio so childishly disdains hadn’t yet financed the rollout of broad internet access, online shopping, takeout at the touch of smartphone button, and other Main Street comforts that have made the political class’s monumental errors in response to a virus at least somewhat palatable.

Rubio or his ghostwriter then makes the routine (for Rubio) tack toward China, and the lament that copious manufacturing in the former slum has meant Americans have suffered shortages of market goods like ventilators and, try not to laugh, hand sanitizer. Actually, until the political class chose to wrest freedom away from Americans in order to “structure” command-and-control, there were no shortages of anything, including jobs. Rich countries free of politicians prone to panic never worry about shortages simply because their efficient production born of interconnectivity with the whole world, interconnectivity financed by Wall Street, proves a major lure for the abundance produced globally.

It should be added that absent the stupendous wealth in the U.S. that’s a consequence of Wall Street’s unrivaled ability to move capital to its highest use, there aren’t trillions for Rubio and his senators to throw at their constituents in such insulting fashion. In short, the hyper-emotional Senator couldn’t handle the relatively brutal world that would exist without an economy “based on finance and service,” but then again, it should be stressed yet again that absent the wondrous living standards that are a consequence of talent being matched with finance, there’s no way Rubio’s a Senator in the first place. The panicked don’t poll well during times of true want.