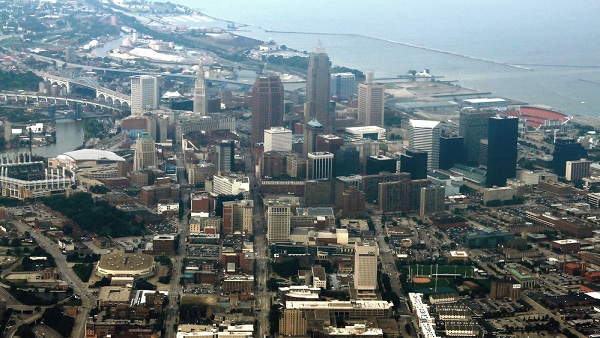 A drive down Fairmount or Shaker Boulevard in Cleveland, OH is a revelation. Remarkable house after remarkable house from the early part of the 20th century.

Hard as it may be for some to imagine, Cleveland was once a highly prominent U.S. economic locale. The city’s many beautiful streets lined with stately houses exist as evidence of this truth. John D. Rockefeller reached great commercial prominence in Cleveland.

Fast forward to the present, it’s more often the case that we meet people from Cleveland, as opposed to people who live there. That we routinely meet people from Cleveland exists as an inconvenient truth for economists, politicians and reporters who point to the closure of a factory, a mill, or a once-prominent business as the driver of a city’s economic decline. Their analysis is wanting.

It’s the norm in any economically prosperous city or region for the team picture in terms of top businesses to change with great rapidity. If anyone doubts this, consider the businesses at the top of the Silicon Valley heap in 2000 versus 2020. To offer up but one example. Yahoo was the hot company twenty years ago, while Apple was struggling to stay afloat. How things change.

It’s all a reminder that business failure or decline doesn’t push cities and states into obsolescence, but the departure of people does. The people who make Silicon Valley prosperous remain, even as the make-up of the region’s top businesses is constantly evolving. The challenge for Cleveland is that there are too many people from Cleveland who live in Silicon Valley, and other soaring cities and regions around the U.S.

At the same time, there’s reason to be optimistic about cities that so many are from. The very technological advances that will likely render Amazon’s time at the top shorter than that of Sears likely heralds the rise of remarkable businesses in places we don’t expect. Lest readers forget, it wasn’t terribly long ago that Seattle was a city that so many were from. Now it’s where people from all over of the U.S. and the world flock to. Seattle’s revival won’t be the last of its kind in the U.S. It’s possible capital flows are already tipping us off to where future surprises might be taking shape.

As the Wall Street Journal reported this week, “Financiers, including Goldman Sachs Group Inc. and KKR & Co., have funded billions of dollars of fix-and-flip jobs through lending arms and investments.” Fascinating is where they’re doing it.  The Journal reports that Cleveland in particular has been a magnet for the real estate arms of top investment banks, as have Pittsburgh, Toledo and other cities that people are usually from. Apparently the cities mentioned provide good “spread” for investors looking to purchase what’s underpriced, fix it up, then re-sell it or rent it.

So while housing consumption is a consequence of economic growth, as opposed to a driver of it, that so much of what some would consider “smart money” is migrating toward these seemingly underpriced opportunities is a market signal that can’t be ignored. If cities like Cleveland were being depopulated of talent, it’s hard to imagine where the gains could be derived from fix-and-flip. That there’s an opportunity to fix and flip presumably signals growth that’s already taking place, and that is always an effect of people.

Cleveland as a magnet for Wall Street-style investment is also a reminder of an economic truth that regularly eludes those who should theoretically understand it best: money supply is a consequence, not an instigator. Getting right to the point, no individual, city, region, state or country need ever worry about so-called “money supply.” If there’s economic activity, or the potential for it, “money supply” meant to facilitate the movement of resources will always be there.

It’s easy to see why this is true now. The Federal Reserve didn’t decree that Goldman Sachs, Blackstone and others should do business in Cleveland, nor did it helicopter money into the city. What happened was the pursuit of profit. Goldman manages the wealth of some of the world’s richest people and institutions. Those people and institutions have their money at GS because those in its employ are expert at finding investment opportunities of all kinds. It seems a combination of relatively inexpensive housing in Cleveland combined with rising demand by the city’s citizenry represents an opportunity for the world’s most prominent investment bank.

Translated, money supply springs from perceived opportunity, not thanks to central bankers.

If anyone doubts this, consider what happened in Cleveland nearly fifty years ago. The City’s Cuyahoga River, which was the picture definition of filth, caught fire yet again. The latter was symbolic of the once great city’s decline, and it spoke to a departure of the people who power economic progress. Assuming a proverbial central bank helicopter drop of money into Cleveland then, it’s safe to say that the funds would have departed the city as quickly as they arrived. Money follows people.

Fifty years later, the arrival of keen investors bent on improving the city’s housing stock arguably signals something greater at work. This presumed revitalization of Cleveland yet again wasn’t decreed or forced as much as it’s being driven by investment. Investors see opportunity that is likely being created by a return of human capital, and “money supply” that is otherwise known as finance is flowing in to facilitate the revival.

Economists would be wise to understand what’s taking place. Bent on “increasing money supply” to stimulate growth, the credentialed miss the point. Human capital is always and everywhere a magnet for the money supply that is an effect of human capital. The Fed gets the nature of economic growth backwards, as do those who view the central bank with such overdone reverence.