Hey, Disney, Hamilton Betrayed His Wife And His Country 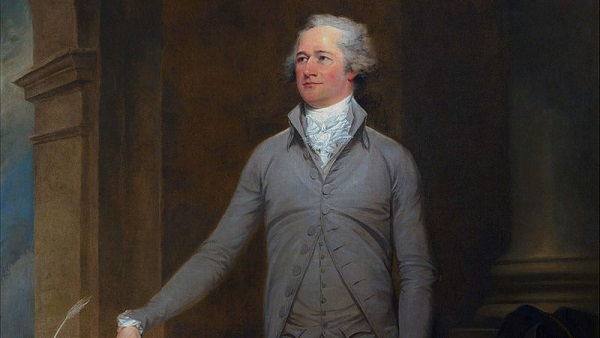 Lin-Manuel Miranda’s wildly successful Broadway musical Hamilton would embark on its fourth tour this fall had the virus not canceled it. Instead, a video version will begin airing on Disney+. It helps to appreciate the magnitude of Miranda’s accomplishment to know that T. S. Eliot, often called the greatest Christian poet of the 20th century, met moderate success at infusing theater with verse. Eliot considered Shakespeare to be the greatest poet in English because he integrated the two so well.

The hero, Alexander Hamilton was a signer of the Constitution and was a founding father with faults. He cheated on his wife who forgave him, as Miranda points out. And he betrayed his country with his founding of a national bank. Hamilton was well-read, so he had to know that the Bank of England was founded and given a monopoly on currency in exchange for financing war against France. Before governments could borrow unlimited amounts from banks, they had to tax the people to pay for soldiers and weapons, so wars were much shorter.

And Hamilton had to know about the South Sea Bubble in England and the Mississippi Bubble in Paris. In both cases, the banks established by the governments of England and France issued tsunamis of new currency that resulted in rocketing prices in stock markets, housing, carriages, and horses. Both bubbles burst in 1720, leaving the two countries much poorer. Richard Cantillon made his fortune in the Paris mania by short selling stocks and insisting on payment in gold rather than the worthless paper money. Cantillon explained the failings of the Paris bank in his Essai Sur La Nature Du Commerce En Général, published in French in 1755. Hamilton may not have read Cantillon, but he quoted from Postalthwayte’s Universal Dictionary, which reprinted much of Cantillon’s book.

In spite of this infamous history, Hamilton demanded the US repeat England’s and France’s mistakes. His insistence on a bank revealed his contempt for the document he had just signed, the U.S. Constitution. Thomas Jefferson challenged the constitutionality of Hamilton’s bank because the document did not give the federal government that authority while it prohibited all powers except those enumerated. Hamilton responded that the authority to establish a bank was an implied power, affirming that he had no intention of allowing the document to limit the growth of a federal government. Jefferson understood, and purchased Louisiana from Napoleon while admitting the act was unconstitutional. Presidents and Congresses continued to shred the Constitution through the 19th century, culminating in Woodrow Wilson declaring it irrelevant.

If central banks are such a bad idea, why does almost every country have one? One reason is that they make possible low interest loans to governments, so people in favor of leviathan-style states and constant war will demand a central bank. Bankers love them for two reasons: 1) a central bank allows them to inflate the money supply to a far greater degree than what they can do without one and printing money is very profitable; just ask a counterfeiter. But printing money as banks do is also dangerous, as Cantillon pointed out. It leads to bubbles, bank runs and bank failures. So the other reason banks like central banks is the central bank bails them out when the bubbles they created burst.

President Jackson got rid of Hamilton’s bank and American voters kept the country free from one until 1913 because they understood how money works better than Americans have since then. For example, the novel The Wizard of Oz was about the debate over gold and silver as money in the late 19th century. The Great Depression and Great Recession, as well as the recessions of 1981 and 1982, were far worse than any the country faced in the 19th century and they happened under the Federal Reserve’s watch. The decline in the quality of public education in the US has made the American people ignorant about money. As a result, we now face money printing to infinity and beyond.

But money isn’t wealth. It’s a common denominator for exchanging services in the marketplace. Counterfeiting money can make the counterfeiter wealthier, but not the whole country. Real wealth consists of the houses, cars, airplanes and services that people produce. Printing more money doesn’t help produce anything of value.

Money printing causes booms that bust and turn into recessions. Mainstream economists think more money printing will pull the economy out of the ditch, but it won’t. They’re guilty of the post hoc fallacy. Only entrepreneurs can make the economy grow and they do it by taking risks and investing in new and expanding businesses when everyone else is hiding in fear. Mainstream economists and bankers give their money printing credit for what entrepreneurs do.

Hamilton was wrong about central banks and we pay the price for his mistake today. Those who know real monetary theory understand that Hamilton was a worse traitor than Benedict Arnold.