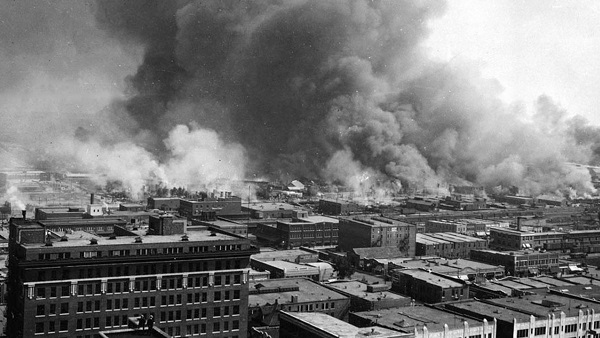 President Trump plans to re-launch his campaign rallies starting in Tulsa, Oklahoma tomorrow. He’s come under heavy attack for choosing Tulsa because it’s well known as the site of a terrible racist massacre in 1921.

“[President] Coolidge knew the Klan had considerable political power throughout the nation. It even threatened to disrupt the everyday functions of the federal and state governments, as evidenced by the near civil war underway in Oklahoma.”[1]

The racial, class, and prosperity envy of the various Tulsa mobs sparked mayhem and massacre for the prosperous blacks on May 31st and June 1st. But lost in the many discussions is that the prosperity of the “Black Wall Street” was the result of churches teaching the Biblical roots of success.

When envious attitudes became evil actions, the overnight destruction in Tulsa caused the loss of lives and prosperity and took decades for the blacks and communities to recover. But for any recovery to occur, it must start with the Church teaching Biblical principles of law and order, entrepreneurship, and economics. America was founded on the bedrock of the Bible.

Racial and all reconciliation grows when the Bible’s righteous reasonings of property, productivity, and prosperity are taught in the Church empowering us to do good. Biblical entrepreneurship transforms righteous dialog into the dignity of righteous doing. God’s Word has given us permission to produce something of value for others and cross all racial and other demographic boundaries. Imagine every Saturday, for instance, a white and black congregation create sister churches and split their congregations to break bread together (breakfast and lunch). They break down barriers… together. They learn Biblical prosperity… together. These sister churches apply Biblical entrepreneurship for the marketplace… together. But don’t take my word for it, Booker T. Washington’s wisdom in his 1907 autobiography, Up From Slavery, proves how teaching Biblical entrepreneurship heals racial divides and produces prosperity for blacks and whites alike, for all of us.

The making of these bricks taught me an important lesson in regard to the relations of the two races in the South. Many white people who have no contact with the school, and perhaps no sympathy with it, came to us to buy bricks because they found out that ours were good bricks. They discovered that we were supplying a real want in the community. The making of these bricks caused many of the white residents of the neighborhood to begin to feel that the education of the Negro is not making him worthless, but that in educating our students we we adding something to the wealth and comfort of the community. As the people of the neighborhood came to buy bricks, we got acquainted with them; they traded with us and we with them. Our business interest became intermingled. We had something which they wanted; they had something which we wanted. This, in large measure, helped to lay the foundation for the pleasant relations that have continue to exist between us and the white people in that section, which now extends throughout the south.[2]

Reconciliation includes gender. Ask any Christian businesswomen, “Of ALL of the Christian Proverbs 31 content, how much do they devote to Christian women entrepreneurs?” In unison, women will reply, “Near zero percent!” Yet the whole chapter talks of how a Godly businesswoman positively impacts her family, friends, employees, vendors, and community. All reconciliation begins with God and must begin with the Church.

Eph 2:14-16 For He Himself is our peace, who made both groups into one and broke down the barrier of the dividing wall, by abolishing in His flesh the enmity, which is the Law of commandments contained in ordinances, so that in Himself He might make the two into one new man, thus establishing peace, and might reconcile them both in one body to God through the cross, by it having put to death the enmity.

Most churches sit unused Monday through Saturday. Imagine every one of the 350,000+ churches in America is fully engaged in teaching Biblical entrepreneurship. Men and women, teenagers, widows, single moms and dads, black, brown, yellow, red, and white people all discussing and engaging in teaching and mentoring Biblical prosperity principles through Biblical entrepreneurship. If Christ broke down these walls, where’s the Church? It’s not about having more redistribution of wealth with more non-profits and more government and business grants misallocating money. It is about the Church putting to use what sits unused and untapped and transforming its economic and entrepreneurial lukewarmness, to build Biblical entrepreneurship ecosystems in every church to cross all demographic boundaries and rebuild America.

When we love our neighbor AS ourselves, we serve others and build bridges of prosperity for all in the marketplace. Teaching Biblical entrepreneurship strengthens our weak morals and education through learning God’s way of Character + Commerce. Jesus and His Word will bring racial reconciliation, Washington proved that the Godly roots of His success habits of Biblical empowerment and self-reliance can reconcile our differences and transform communities.

But is His Church up for His challenge? President Trump, shine the light on Biblical success.