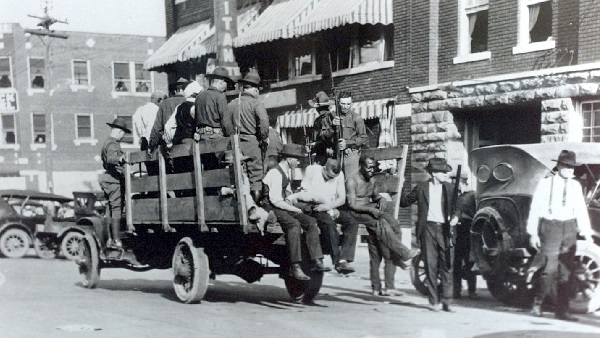 President Trump’s recent rally in Tulsa didn’t attract the expected crowd, but it was a good one. There was no violence and the President was at his best. One of the best things to come out of the event was increased awareness of the massacre of over 300 black citizens in Tulsa 99 years ago, the worst racial violence in US history.

Many former slaves left the deep south after the Civil War for Oklahoma expecting less discrimination among the tribes. The community in Tulsa became so wealthy it earned the nickname of the Black Wall Street of America. But many confederates also migrated and soon outnumbered the tribes and blacks. The KKK moved into Tulsa in 1920 and began looking for an excuse to attack the black community. It found one in the fabricated story of the rape of a 17-year old white girl, Sarah Page, by a 19-year old black boy, Dick Rowland.

Rowland was a handsome and popular athlete at Booker T. Washington high school and had been dating Sarah, who worked as an elevator operator in a department store. One day Dick visited Sarah and while leaving the elevator stepped on Sarah’s foot. A clerk in the store overheard Sarah castigate Dick for the accident, ran to the police and reported an attempted rape. Dick was arrested and put in jail. The KKK rounded up its troops and began murdering black citizens and burning businesses to the ground. Although the Tulsa Sheriff was a KKK member, he sent Dick with a deputy to Kansas City for his safety. Sarah relocated to Kansas City, too, where there is evidence the two married and raised a family.

Blacks defended themselves with their own guns so well that they forced whites to end their rampage and murder. One can only imagine the slaughter that the KKK would have inflicted had blacks not owned guns. The KKK had infiltrated most law enforcement in the city.

Socialists, black and white, end the story with the horrible death and destruction in order to blame today’s poverty on the massacre. Many black businessmen abandoned Tulsa after the massacre, but enough stayed that the business community rebuilt. By 1942, the black community enjoyed 242 businesses and was wealthier than ever. The KKK withered in Tulsa and a few years after the massacre the county sold its grand meeting hall for unpaid taxes.

To look at the streets today that used to criss cross Black Wall Street, visitors wouldn’t know that businessmen rebuilt. Only two blocks of buildings are left and are mostly empty. The greatest destruction of Black Wall Street happened forty years after the massacre.

Rebuilding Black Wall Street testifies to the toughness and resilience of black businessmen in the face of oppression from their own government and racism from their neighbors. Today, US black people are among the richest people on the planet and wealthier than the vaunted Swedes. They accomplished that astounding feat through entrepreneurship, not through government hand outs.