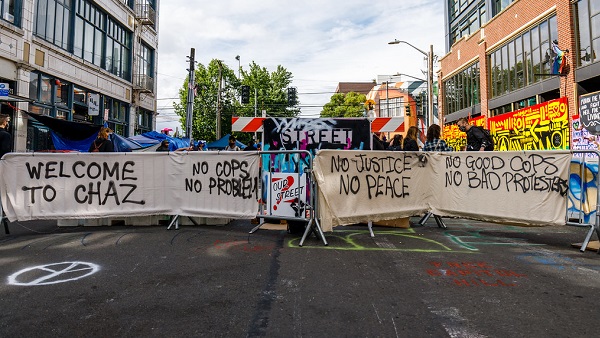 A crucial step in replacing America’s freedom-centric paradigm with a socialist, authoritarian model is destroying the institutions that safeguard personal liberty. Freedom of speech, the right to bear arms, the limitations on federal authority, all of these crucial provisions within the Bill of Rights are under constant and substantial attack by the Left.

Politically, an overt attack on these key Constitutional protections would face little chance of success. The apparent strategy adopted has been to first convince Americans that the nation is so evil, both currently and in its past, that massive remedial measures must be taken.

Those individuals and institutions who question this obviously false narrative are subjected to horrific retribution, both in terms of slander and libel, and violence and threats of violence. Doxing, commonly defined as the Internet-based practice of researching and publicly broadcasting private or identifying information about an individual or organization, is one such type of harassment. The methods employed to acquire this information include searching publicly available databases and social media websites, hacking, and social engineering. The goal is to encourage threatening incursions at or near the homes or offices of those who dare to question the Left’s false charges.

Crucial to the Left’s success is eliminating any center of influence or power not subservient to their power. That explains the ongoing vicious diatribes against any politician, Democrat or Republican, who differs in their views. It also explains the unprecedented assault against religion. The wave of arson against churches and the rampant anti-Antisemitism are due to this.

A vital component in the Left’s strategy is trying to convince the citizenry that they are not free and require an overwhelming change. It is an absurd notion in the United States, but one which Progressives increasingly propagate. Ryan Cooper, writing in The Week, dubiously alleges that, “Americans are, in fact, an extraordinarily unfree people, oppressed and downtrodden on all sides[.] […]This is in part because our typical notion of freedom, based entirely around the ability of the individual to do what he or she wants free of government interference, is a preposterous fiction.”

New York City has proven to be a prime testing ground for how far Constitutional safeguards can be ignored. Mayor Bill de Blasio, (who cheered on the Soviet Union when it placed combat weapons in Nicaragua and honeymooned in Cuba) has moved expeditiously, supported by a hard-left dominated City Council. He has unlawfully used city property to advocate hard-left causes. Astoundingly, he has decreed that gatherings be banned, except for those he politically approves of. He has attacked and demoralized nonpolitical centers of influence, including the Police Department and religious institutions.

De-legitimizing duly elected government is another approach. The revolt against the results of the 2016 election is the most salient example, but not the only one. The Chaz district in Seattle, where leftists invaded and occupied an entire community (including a local police precinct) was a direct challenge, similar to the firing on Fort Sumter.

The refusal by state and local government to move against the Seattle Secessionists speaks volumes about the mindset of Progressive elected officials.

Pitting one segment of the citizenry against the other is a crucial process in the Left’s drive. Progressives have succeeded most spectacularly in diverting attention from their assault on freedom by distracting the citizenry through resurrecting racial inequities that had been largely abolished a half century ago. The central thesis of those attempting to initiate a race war in America is that, even if there is not one law, rule, procedure or practice that is racist, America is a racist nation so long as any individual commits a racist act. That, of course, establishes a criteria that every single citizen must be totally pure of heart, thought and deed, a criteria no human society can attain.

It is a sobering reality that, so far, the Progressive war on freedom has made extraordinary advances.