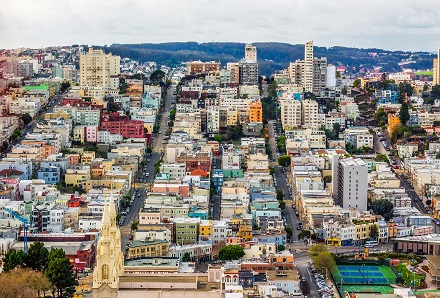 San Francisco is a great city and an entrepreneurial powerhouse. It produces 2.72% of the nation’s economic output (as measured by GDP, the most common measure of economic growth), while it only comprises 1.43% of the population. So, with a GDP per person of around $91,000, it ranks far above the national average.

But its real estate prices are considered very high. How do we know that? A cap-weighted approach to real estate investing puts a greater share into a particular sector in a particular region (such as apartments or office buildings in San Francisco) based on the prices of all the publicly investable real estate added up together. A very widely known cap-weighted index places 9% of its apartment money in San Francisco, and 11.4% of its office money.

As you can see, that is far higher than the apportionment which would occur if the investment were divided up based on the economics. That might be okay if the dynamics were such that people, especially wealthy people who by nature pay higher rents, were rushing into the city. However, people, especially wealthy people, seem to be rushing out of the city. Here’s what one of the local newspapers says about the trends in real estate in the distant exurbs of San Francisco in comparison with the central metro area.

“Amid the depths of a global pandemic and financial downturn, the demand for real estate is unexpectedly rocketing in wealthy regions outside San Francisco, reports Bloomberg. Agents say that demand is soaring in affluent areas around the Bay Area such as Napa, Marin and further afield in Carmel, as people who have the means look to get away from the city. Meanwhile, the market in San Francisco and Alameda County is still well below where it was last year.”

Why is this happening? It’s hard to know everyone’s motives. The recent crises have disproportionately hit large, densely populated coastal cities with a lot of foreign travel and political cultures, and which are somewhat hostile towards landlords – and it may well be that these impacts could reverse if these crises reverse.

However, there’s another factor. The shut-down has created a gigantic experiment in working from home. Zoom, Slack, Skype and various other distance communication/collaboration tools have now been purchased, downloaded, learned and for many are on the verge of becoming second nature. Many people are not satisfied with this substitution (especially supervisors), but many people are. And the higher the cost of living and working in a downtown real estate bubble, the greater benefit there is in making distance working a regular thing. Not all work can be done this way. We’ve yet to invent the app for haircuts, but professional and information services are much more amenable to distance working, and those are exactly the kinds of occupations which have kept any possible San Francisco bubble inflated. From the same local paper:

“Elsewhere, Lake Tahoe has also seen a surge in real estate interest. The prospect of living out of the city on an alpine lake while maintaining a career is appealing for a new generation of young buyers, as many tech companies have signaled that remote work may be the new norm for a long time.”

It already seems to be having its effect. The article contrasts a distant exurb, where a home sold quickly and at a price significantly higher than asking, with an in-city collapse of certain types of apartment rents.

“To their surprise, the couple received 13 bids and the home went over the $1.7 million asking price by “a lot,” Kehl told Bloomberg. Sotheby’s agent Ginger Martin added that “there’s a mad rush to get out of the city.””

“Meanwhile, the rental market in San Francisco has dropped significantly, with rates for one-bedroom apartments in the city dropping by 9.2% since June 2019, and hitting a three-year low.”