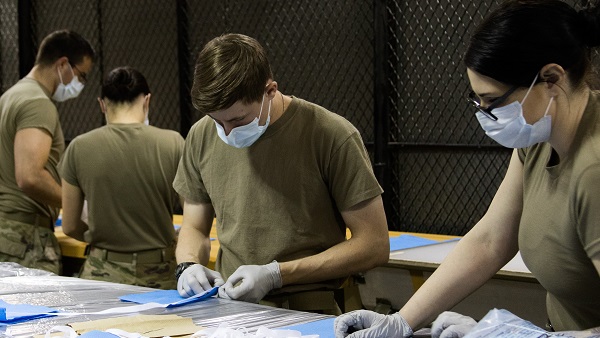 COVID-19 has been making its way through populations around the world, including the United States. While it can be deadly, it is not nearly the biggest danger we face in America at the moment. Radical leftism has come out in the open and is a clear and present danger to America.

Though ongoing riots in our cities are certainly a big deal, the real fundamental problem is that radical leftists have infiltrated most of our important institutions, from education to sports, from many municipal and state   governments all the way to the hallowed halls of Congress. The riots continue only because they have the support and blessing of those in power.

While Marxist mayor Bill de Blasio of New York banned all public gatherings, he gave his blessing to and even marched with protesters. He was touting how wonderful New York City was now that he released hundreds of criminals from prison, even as murders and other violent crime spiked. The mayor of Portland, Ted Wheeler, has demanded that federal agents be removed from their duty protecting the federal courthouse.

Wheeler is the poster child for the incredible irony of the whole protest movement and the ensuing riots. He was actually participating in the riot and destruction of the courthouse when federal agents fired tear gas into the crowds. He is protesting the very government of which he is mayor, the very police department he is in charge of, participating in the destruction for which he said Portland didn’t need any federal help.

That is the pattern for the entire Democratic leadership. If you look at all of the rioting cities, where black businesses and homes are destroyed by continued fire, looting, and destruction, in virtually every case, the city administrations, and often the state administrations, are Democrats. Sorry, that is just a fact. In Congress, Jerrold Nadler and other Democrats on the Judiciary committee put on a pathetic display of partisan hackery in trying to find grounds for impeaching Attorney General William Barr, the same kind of hackery that he and they so openly displayed all through the Trump impeachment hearings, the Kavanaugh confirmation, and on and on. Though Representative Jim Jordan entered videos of the burning and violence as evidence, all that the Democrats could see was Barr oppressing “peaceful protesters,” and that he should be punished for violating their rights to free speech. Of course Barr squished their nonsense by just telling the truth.

Much of what is going on has happened in America before, and we got through it. What is different now is that so many people in so many positions of authority are not only not stopping it, but are actually condoning it and encouraging it. Radical leftism, which has fully infiltrated the highest ranks of the Democratic party, is anti-American, anti-civility, anti-peace, and anti-everything-that-is-good-about-America. John Kerry, the former Secretary of State under Obama, threatened that there would be riots in November if Donald Trump wins reelection. Yeah, things are different.

At this point, Republicans and others have engaged a very wimpy defense. It is time to go on a bold offense. Democrats are the party of inner city poverty, the party of violent crime against blacks, the party of riots and destruction, the party of radical leftist revolutionaries who want to tear down America and install their benevolent socialist utopia. The Democrats have become America’s Bolsheviks, and we can see their utopia in burning buildings and the slums of cities run by the Democratic party.

If people don’t start to speak up, especially rank and file Democrats who are sincerely good people and good Americans, we will keep heading down this very dangerous path. It’s a path that leads to nowhere good for anyone.