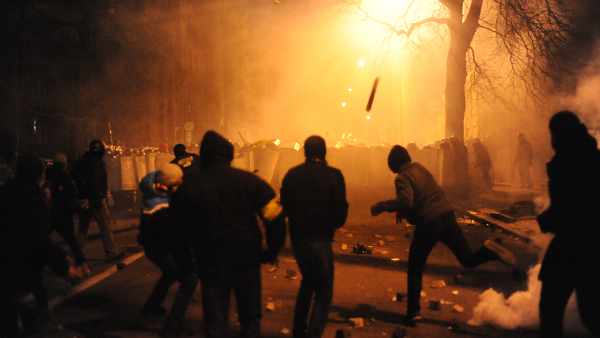 There is an underlying tone in the discussions that journalists, politicians, academics, business leaders, and everyday citizens have among themselves. It is the fear of the mob.

It began first on college campuses, where mobs have prevented non-leftist speakers from addressing students, and discouraged such individuals from even being invited on campus. The problem rapidly grew from attacking free speech to attacking people.

Jeremiah Poff, writing in The College Fix in 2019, reported: “Throughout this fall semester, conservative activists at campuses across the nation have continued to be physically attacked — and had their displays destroyed — by aggressive student peers inflamed by right-of-center messaging…“[The] most recent incidents are just the latest in a long line of campus bullying and intimidation targeting conservatives.”

The trend spread to the streets, which have become unsafe for people expressing support for non-leftist causes. The matter was recently evident when participants in a pro-Trump rally in Washington were attacked.

Making the problem far worse is the almost total refusal of the mainstream media to adequately report its existence. “When violent far left-wing extremists organize violence online, you can always count on the Twitter hall monitors to ignore it,” Mike Cernovich, political commentator, has written.

Coverage of even the most serious acts committed by Progressive perpetrators fairly quickly leave the news cycle. Barely remembered now, due to this intentional news coverup, is the 2017 attempt at the mass assassination of Republican congressmen at a baseball practice, in which four individuals were shot, the most serious being Rep. Steve Scalise. (R-Louisiana), by James Hodgkinson, a left-wing activist.

The refusal to acknowledge left wing violence can be discerned in Hollywood’s popular entertainment venues. There is a common plot in many television dramas. A horrible crime or act of terror is committed, and all indications point to a left-wing extremist group. But in the final moments, the real culprit is exposed to be a right-wing businessman or conservative politician. The message is clear: those in the center and on the right are bad guys, and it’s OK to attack them. After all, as Hillary Clinton proclaimed during a 2016 Democrat primary debate, Republicans are “the enemy.”

Antifa, the left-wing masked stormtroopers who specialize in street rioting, property damage, and physical assaults, have continuously received protected status despite their vivid record of mass violence, mayhem, and serious physical assaults. The mayor of one city they have victimized, Portland, Oregon, has encouraged the police to essentially stand down and surrender the streets to them during their outbreaks. As a consequence, nothing was done when journalist Andy Ngo was beaten so severely by an Antifa mob that he required hospitalization, to cite just one example.

The response to this and Antifa’s other outrages? As reported by the Daily Wire, “Democrat Rep. Debra Haaland (D-NM) proclaimed that far-left extremist group Antifa consists of ‘peaceful protesters’ who are just trying to protect Portland from ‘domestic terrorism.’”

Rep. Maxine Waters (D-Ca.) instructed her followers to assault Trump cabinet members in public places. Individuals have been threatened and beaten merely for wearing “MAGA” apparel expressing support for the incumbent president. Despite the blatant, extensive, prolonged and nationwide employment of large-scale violence, leftist groups continue to be condoned and even celebrated by many politicians.

During the 2020 presidential campaign, Biden was famously reluctant to even acknowledge the Left’s penchant for violence.

All of this is particularly important in the discussions about the irregularities in the 2020 presidential campaign. Americans may argue about whether the evidence of misdeeds and the appearance of middle-of-the night Biden ballots was sufficient to overturn any particular state’s results. But it’s not just the 2020 campaign that is involved. If misdeeds are to be tolerated because the mob will riot if exposed, will there ever be a truly honest campaign in the future?