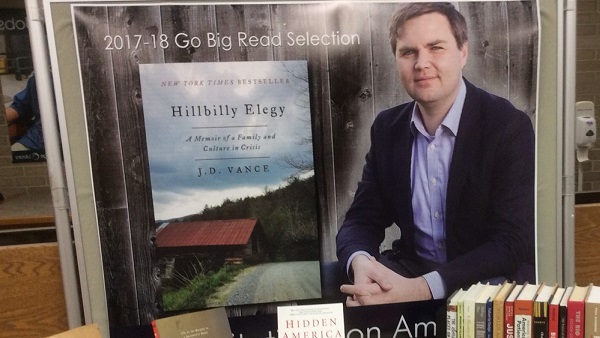 Netflix’s adaptation of J. D. Vance’s autobiography, Hillbilly Elegy: A Memoir of a Family and Culture in Crisis, is more than a rags-to-riches story. It dramatizes one the most important points in economics. For those unfamiliar with it, the summary from Wikipedia says,

“Vance describes his upbringing and family background while growing up in the city of Middletown, Ohio, the third largest city in the Cincinnati metropolitan area. He writes about a family history of poverty and low-paying, physical jobs that have since disappeared or worsened in their guarantees and compares this life with his perspective after leaving that area and life.”

The book made the New York Times best seller list, but it had critics:

“Jared Yates Sexton of Salon criticized Vance for his ‘damaging rhetoric’ and for endorsing policies used to ‘gut the poor.’ […] Sarah Jones of The New Republic mocked Vance as ‘the false prophet of Blue America,’ dismissing him as ‘a flawed guide to this world’ and the book as little more than ‘a list of myths about welfare queens repackaged as a primer on the white working class.’”

The story is about a culture, but that culture extends much farther than the Blue Ridge mountains. Check out this map of the eleven cultures of the US. The Appalachian culture extends west through Oklahoma and Texas. I have some familiarity with Vance’s culture because it is strong in Oklahoma from the Ozarks in the northeast to the Ouachita Mountains in the southeast, where my maternal grandfather ranched. He had a problem with people stealing his cattle, or “rustling,” and butchering them.

I asked him once why he didn’t report it to the sheriff. He told me that the sheriff was probably getting a cut from the thieves, but if he wasn’t, he would be too afraid to venture out the town of Antlers, the seat of Pushmataha county. On the remote possibility that the sheriff was honest and would arrest the thieves, the judge would turn them loose in 24 hours and they would be furious at my grandfather for informing on them. Then he would have to fight them. He told me he wouldn’t kill a man over a cow, so he shot close enough to them that the thieves would think he intended to kill them but was a bad shot. That kept the cattle rustling to a manageable level.

Culture is the missing ingredient in mainstream economics. Students won’t learn anything about the impact of culture on economics unless they take a class in economic development and those are usually taught by Marxists. Most mainstream economists deny that culture has any impact on the field. Of course, that’s because they can’t fit a variable for culture in their models.

Sociologists know about the intersection of culture and economics. Samuel P. Huntington wrote about it in Culture Matters: How Values Shape Human Progress. Helmut Schoeck explained it in Envy: A Theory of Social Behavior and demonstrated the way envy structures the economic institutions of a society. Of course, Douglass North won a Nobel Prize and invented the field known as New Institutional economics.

The Poverty of Nations: A Sustainable Solution by Baptist theologian Wayne Grudem and economist Barry Asmus has a good chapter on the cultural problem. They show that after independence, Botswana chose a Christian ruler who implemented the basic principles of classical liberalism and has grown to be one of the wealthiest countries in Africa. Few in the US have heard of Botswana because it’s peaceful. Most other African nations used their gift of independence to exploit envy, as Schoeck demonstrated, and have remained poor, violent and war torn.

If you want to understand the intersection between poverty and culture in the US, you need to read Dr. Thomas Sowell’s Black Rednecks and White Liberals. Sowell traces the origins of hillbilly or Appalachian culture back to the hill country of the borderlands in the UK where most US southerners came from. They valued hard drinking, fighting, and promiscuity. They despised hard work, punctuality, or education. Most freed slaves embraced the Appalachian culture while others took on the European culture of northern whites. Essentially, Sowell demonstrates that there is no black culture that is different from white culture. Blacks borrowed either the failed hillbilly culture or the successful European culture.

Many critics of the Hillbilly Elegy book and movie get the economic message in them. That’s why they’re so angry. Socialism has always taught that people are born good and society causes bad behavior, so they blame “capitalism” for the hillbilly culture. Socialism would save them. Capitalism, having been derived from the Bible, teaches that people are born with a tendency toward evil and can choose which culture to follow. Those who chose the hillbilly culture suffer poverty because of that culture.

The media, BLM, and Democrats call successful culture white, but many blacks have joined it, otherwise US blacks wouldn’t be among the richest people on the planet. And a lot of rural whites have perpetuated the failed culture of Hillbilly Elegy. However, the culture of success didn’t come from whites, but from a Jew, whose birth we celebrate this week.