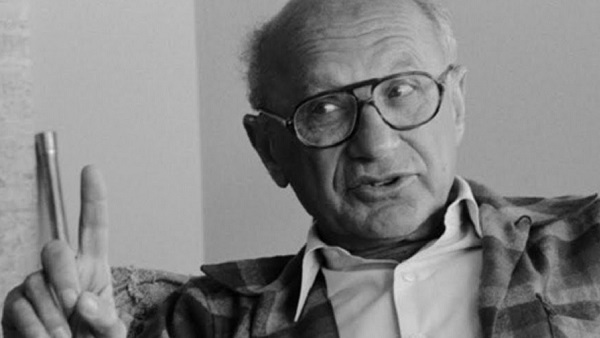 The great free-market economist Milton Friedman was not perfect in his theories as he, too, supported governments controlling the money supply and the monetary policies reinforcing such a system.[1] The reputable economist Ludwig von Mises aptly clarified in 1944 in his book, Omnipotent Government, that “[t]he gold standard puts a check on government plans for easy money.” Mises continues:

Additionally, according to Mises, “Inflation is essentially antidemocratic.” Without the gold standard, the true economic foundation of the free market cannot exist in any stable manner for the long term.

The free market and the gold standard are an advantageous combination “in opposition to the theorists who, led by [John Maynard] Keynes and the monetarists, opted to blow up the monetary and fiscal foundations of the laissez-faire economy, which until then [1930s] had fueled the Industrial Revolution and the progress of civilization.”[3]

Murray Rothbard also writes how going off of the gold standard and adopting a fiat currency has caused “the United States and the world [to suffer] the most intense and most sustained bout of peacetime inflation in the history of the world.”[4] Mexican entrepreneur and businessman, Hugo Salinas Price, quite eloquently and ominously describes how fiat currencies are more damaging than modern warfare, specifically:

This is destruction many times worse than the worst destruction of any war. That is where we are today. This is what fiat money has brought to the world. Fiat money is the child of the arrogance of human intellect, which has sought to invalidate the laws of human nature which have regarded the precious metals as money for thousands of years, and sought to substitute an intellectual construct for the real thing. Now we are going to pay for that arrogance.[5]

Essentially, straying from the gold standard is an action born from ego and a grave error.

[4] Murray N. Rothbard, 2010 (originally published in 1963), What Has Government Done to Our Money? (Auburn, AL: Ludwig von Mises Institute), p. 109.  While there have been many episodes of hyperinflation, those of been very short-term relative to the length of time which the United States has suffered under inflation which is now at 100 years.  For historical episodes of hyperinflation see Steve H. Hanke and Nicholas Krus, Working Paper: August 15, 2012, “World Hyperinflations,” (Washington, D.C.: Cato Institute), [http://www.cato.org/sites/cato.org/files/pubs/pdf/WorkingPaper-8.pdf].

[5] Hugo Salinas Price, September 24, 2012, “Reflections on the effects of War as compared to the effects of Fiat Money,” Plata.com.mx, [http://www.plata.com.mx/mplata/articulos/articlesFilt.asp?offset=10&fiidarticulo=194].

This originally appeared on Townhall Finance.