Steve Forbes: Time To Worry About Inflation, Not Hyperinflation 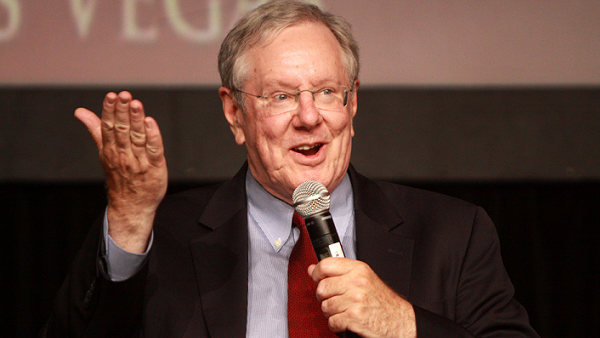 In a recent interview for my podcast, Meeting of Minds With Jerry Bowyer, Steve Forbes, Editor-in-Chief of Forbes Magazine, Chairman of the Board of its parent company, and former presidential candidate, joined me to talk about the rising risk of inflation. Steve is the only person to win US Steel’s Prestigious Crystal Owl award 3 times for economic forecasting. He untethered his inner owl for us this week on the question of inflation. Neither a perma-hawk nor a perma-dove, and certainly no Chicken Little, Steve is currently concerned about the inflation outlook and the value of the dollar.

Conservative and libertarian commentary about hyperinflation has exhibited a disturbing number of “false positives,” meaning far more frequent and far more dire warnings have been issued than have come to fruition. Steve is not among them. He explained why after 2008 warnings of price inflation failed to pan out. Regulators imposed on banks global rules (under the name of Basel III), because it was the third round of such rules issued from Basel Switzerland, requirements to basically hold more money in reserves. This meant that much of the money injected into the banking system in the name of stimulating the general economy stayed in the banks and didn’t reach the general economy. Adding economic insult to financial injury, the central banks paid the member banks to not loan money to customers, by paying interest on those reserves.

I would add, and Mr. Forbes appears to agree, that in addition to such dollar hoarding at home by banks, there was dollar hoarding overseas as well. We all know, at least anybody who reads my columns knows, that inflation is “too much money chasing too few goods.” But that’s the basic formulation. We need to expand that a bit in order to understand the paradox of low inflation over the past decade despite massive Fed intervention. In order to have domestic inflation, you need to have domestic circulation of money. In other words, the money has to be “chasing” the “goods.” If the money is not circulating, but under lock and key via government edict in the vaults, then it is not yet a driver of price inflation. In addition, if the money is circulating, but not domestically, then it is also not a driver of domestic price inflation – yet.

But, Forbes adds, the restraints of Basel III are no longer a guarantee against inflation. The banks have loaded up their reserves and passed their various stress tests, which means they are free to lend again. So the money will flow, is flowing.

My analogy: the banks were always required to have a bucket of money in case of fire. Easy Fed policy made it easy to fill the bucket. Basel Accords ordered to banks to keep a bigger bucket. The bigger buckets are now filled to the brim and the money from the Fed spigot is overfilling the bucket and liquidity is spilling over the brim.

Forbes also offers a fascinating analysis of the run-up to the Great Recession. This touches upon a (friendly) disagreement between various supply siders which played out around 2006-2007 about inflation. All parties agreed that the Fed, which had pushed interest rates down to 1% for an extended period of time, had been too easy. The Fed then pivoted to a series or rate hikes to forestall that inflation. Some of us (looking mainly at interest rates signals) said that the Fed was hiking too much and that inflation was less of a risk than such rate hikes assumed. Others, frequently pointing to gold prices, said that inflation was the big danger, not credit contraction. In retrospect what we both see is that the Fed had not created much general price inflation, but it had created a lot of asset price inflation. So, was inflation the risk? Depends on what you mean by the word “inflation.” We mid-ought doves meant general prices. The mid-ought hawks meant assets. Or at least in retrospect, the two sets of views have converged, because that’s what happens when open-minded people follow the evidence – we learn.

Given Forbes’ track record as sober analyst, not fear monger, I think we should take his warnings about elevated inflation very seriously, but we should also not elevate his warnings above what he is actually saying. He does not see imminent hyperinflation. He does see rising risks of inflation. Currency markets, commodity markets, and the inflation protected bond markets (TIPS) all seem to be seeing that same thing. So am I. But during times like this, prices are volatile, which means you get bouts of high inflation (like now), partly driven by Covid distortions, partly by less transient factors, but also there will likely be patches of low (even negative) inflation as the distortions recede and new baselines are used for calculation. But in general, even after Covid confusion sorts itself out, risks to the upside seem higher than risks to the low side.

Inflation is an ongoing topic of analysis on Forbes’ excellent podcast, The Steve Forbes Podcast, “What’s Ahead.” I strongly urge you to listen and subscribe.

My conversation with Forbes can be found here or here.

13:50 – Small amounts of inflation can still do big damage

Rubio Accuses China of Interfering in Midterms Through TikTok
The Floridian